After a successful first year with an animated display, I decided to venture into RGB lighting this year. My first attempt with RGB pixels are leaping arches around the megatree in the circle drive. This is the chronicle of that build effort.

I saw the arches I wanted to build on the forums of doityourselfchristmas.org. The first item under the Display Items section of the forums is called Arches of Light. There is a thread under there called HDPE arches. That thread details the arches that I am building.

I ordered the tubing from McMaster-Carr. I bought 2 100′ rolls. The tubing was $1.51/foot ($302 total), shipping to Colorado was $126. It took a couple of weeks to get. This is what one of the rolls of tubing looked like when it arrived: 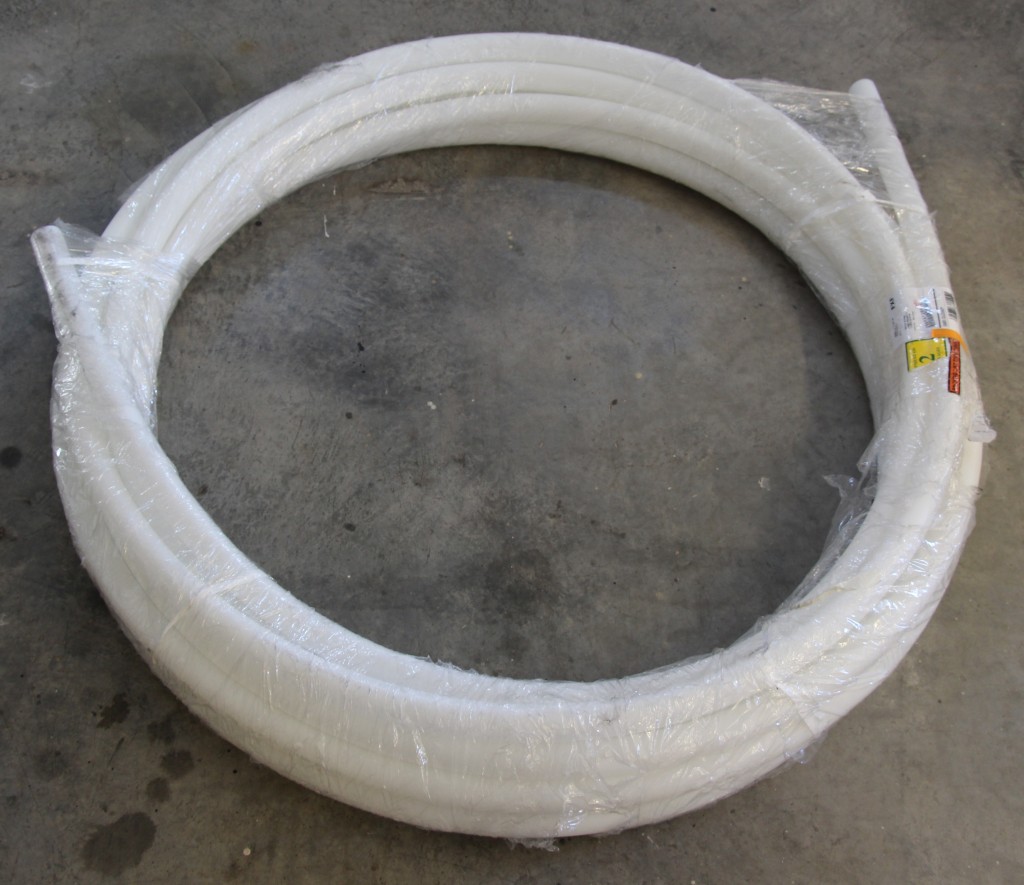 I unwrapped the tubing, expecting it to unwind and straighten out, but it pretty much held its shape. The diameter of the roll was about 5 feet, which is close to the diameter of my arches, so most of it is already close to the correct shape. The only problem will be the ends, which are pretty straight. Since I need 12 8-foot arches out of a 100-foot roll, I don’t have much extra. If I did, I would just discard the ends and use the part that is already curved. I will have to find a way to curve the ends. 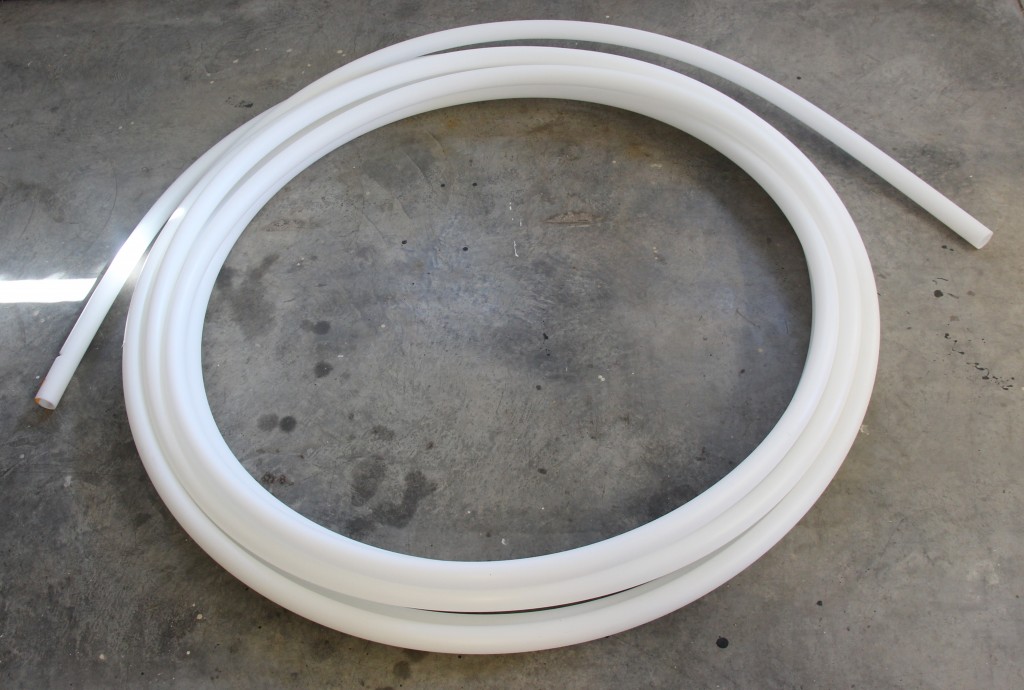 I built a jig to hold the arches after I cut them from the roll. It is just four pieces of 2×6 screwed together at the corners to form a rectangle. The inside dimensions are 60″ x 49″. 60″ is roughly the diameter of my arches, and 49″ is enough to get all 24 arches in with just a bit extra. 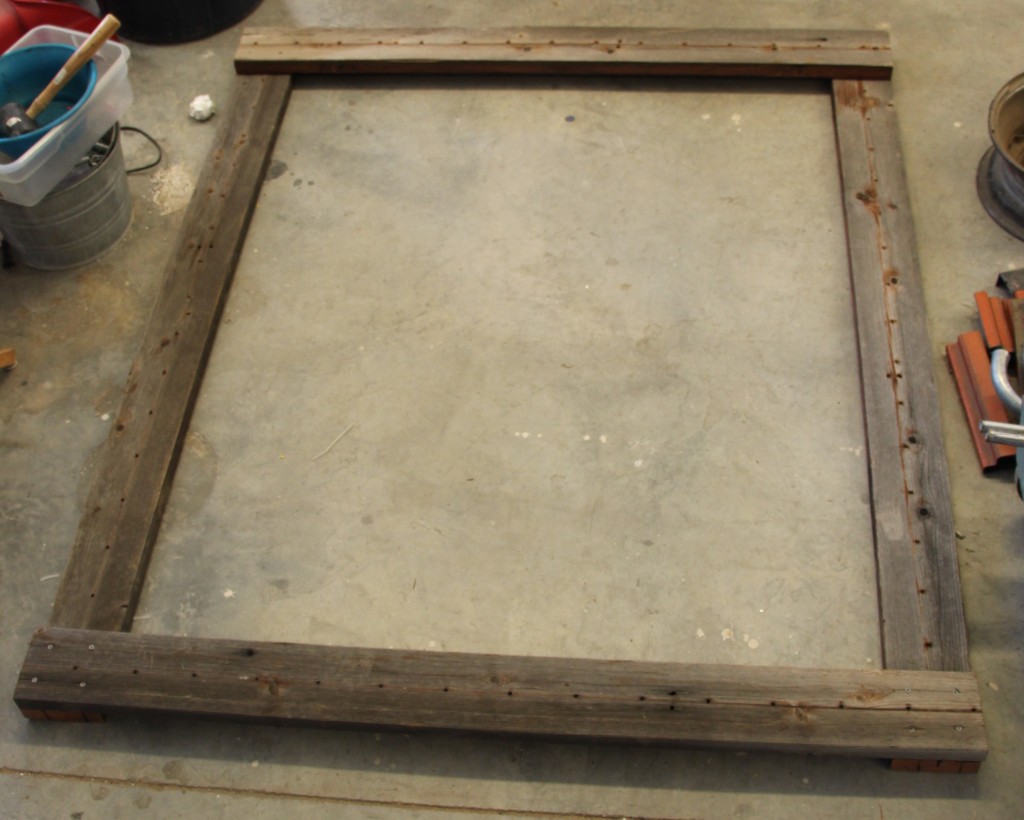 As it turns out, the roll of tubing is actually close to 105′ long. I roughly measured this, so I know I had a few extra feet to play with. I don’t know exactly how long the arches need to be yet, so I wanted to cut them a little longer than I needed to start with. My rough calculations for the length go like this: The pixel strip is 16′ 4″ long, and I figure that 4″ will be lost between the arches if I get them right next to each other at ground level. So I need each arch to be 8′ on the inside of the tubing where the strip will sit. Of course, I couldn’t measure the inside of the roll. So I calculated that 8′ on the inside meant that it would be about 8′ 6″ on the outside. We measured and cut them 8′ 8″ to start with, I will shorten them later. Here are all the arches cut and sitting in the holding jig. I used a piece of rope to hold them all together at the top. As you can see, they are fairly uniform already. That’s my dog Lola stitting under them.

Now on to the controllers. I decided to use three of the Sandevices E6804 controllers for my arches. This configuration fits how I need to arrange the arches and allows me to drive all the arches a full power (all on white at 100%) without overloading anything. Each of the controllers will be mounted in a separate enclosure.

The recommended enclosure to use for the controllers is the CG-1500, so I purchased 3 of these from Creative Lighting Displays. They are about $21 each including shipping to Colorado.

I purchased the power supplies to run the controllers and arches from Ray Wu. The problem with them is that there is no easy way to mount them in the enclosure with screws. 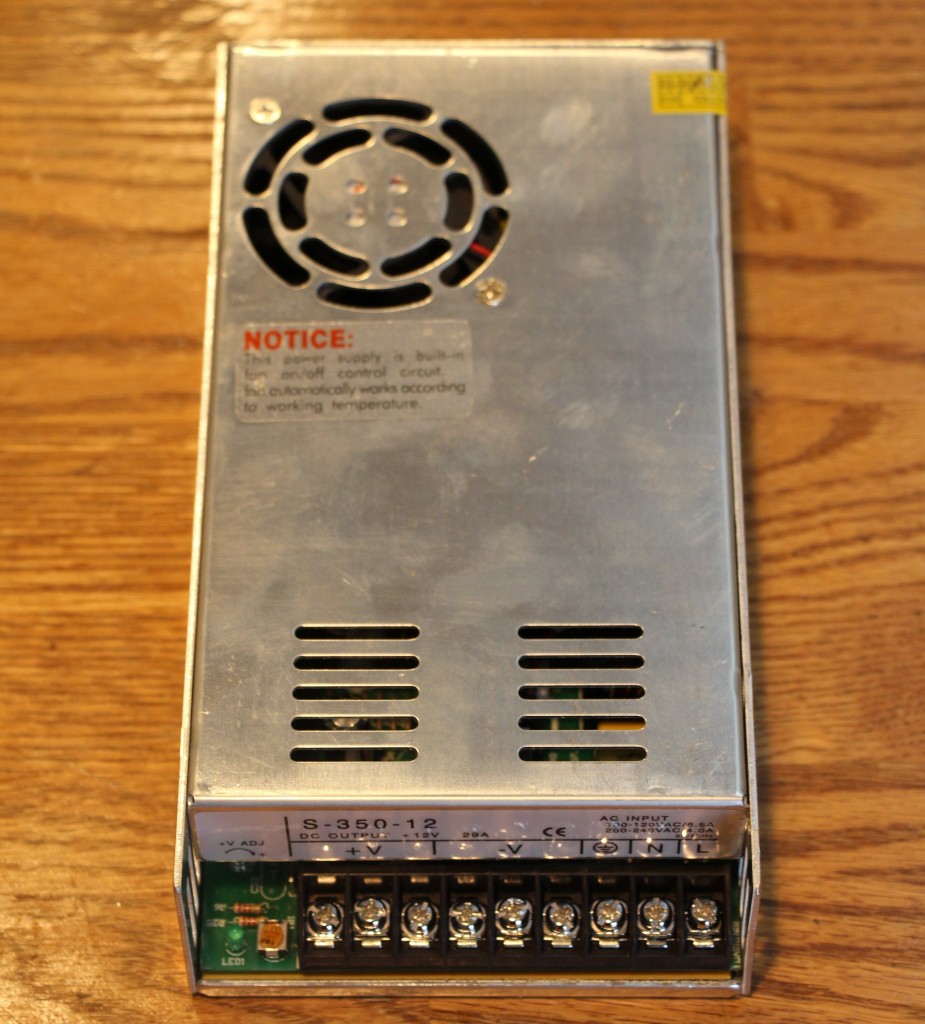 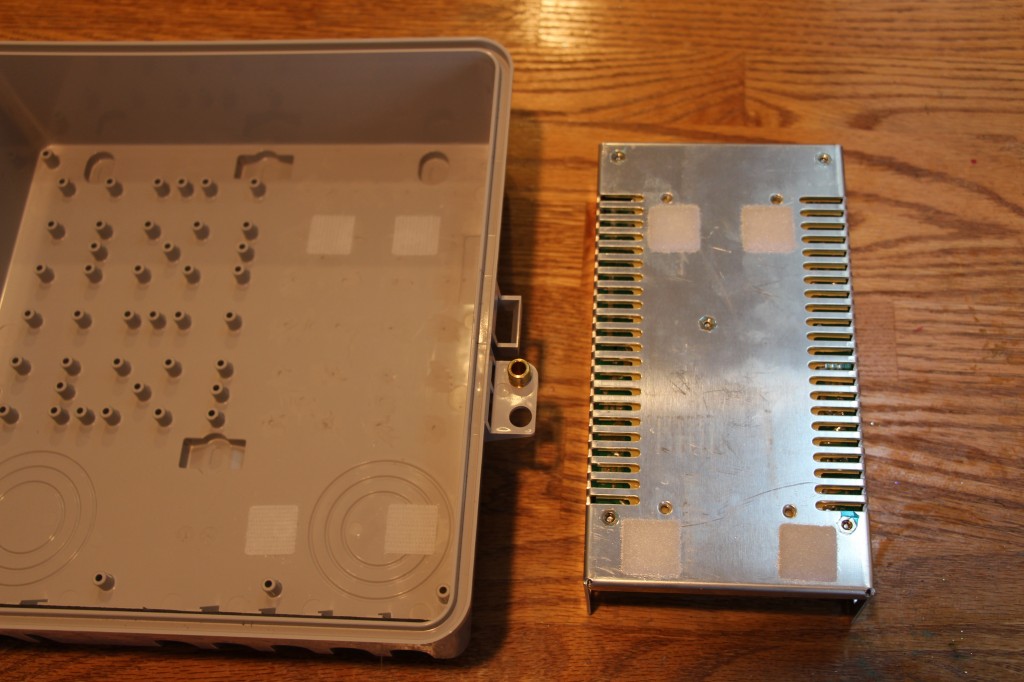 The power supplies also do not come with a line-cord. I picked up 3 of these at Home Depot. This is the power supply mounted in the enclosure with the power cord connected. 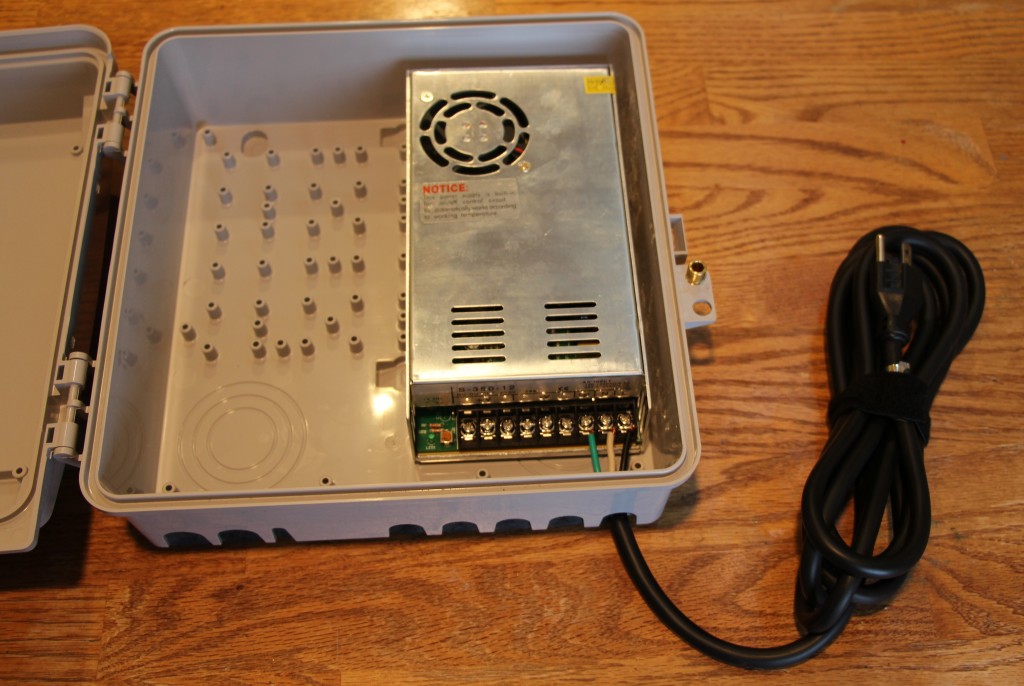 Next is to mount the E6804 controller. The controller has mounting holes that match the pattern on the enclosure, so that is good. 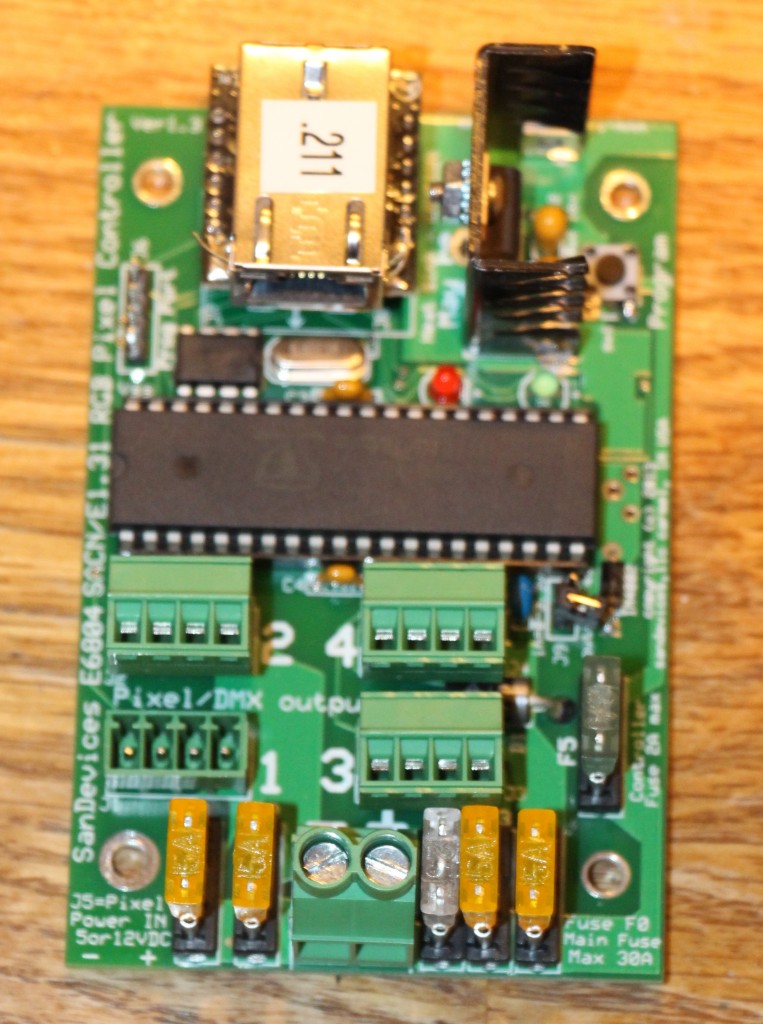 With the board mounted, it is now time to connect it to the power supply. Jim from Sandevices recommended using stranded wire of 14 gauge. I used 12 gauge just to be safe. Home Depot carries this wire in 25′ spools, I used two different colors. Make sure you match up the + and – sides of the controller to the + and – sides of the power supply. Both are clearly marked. 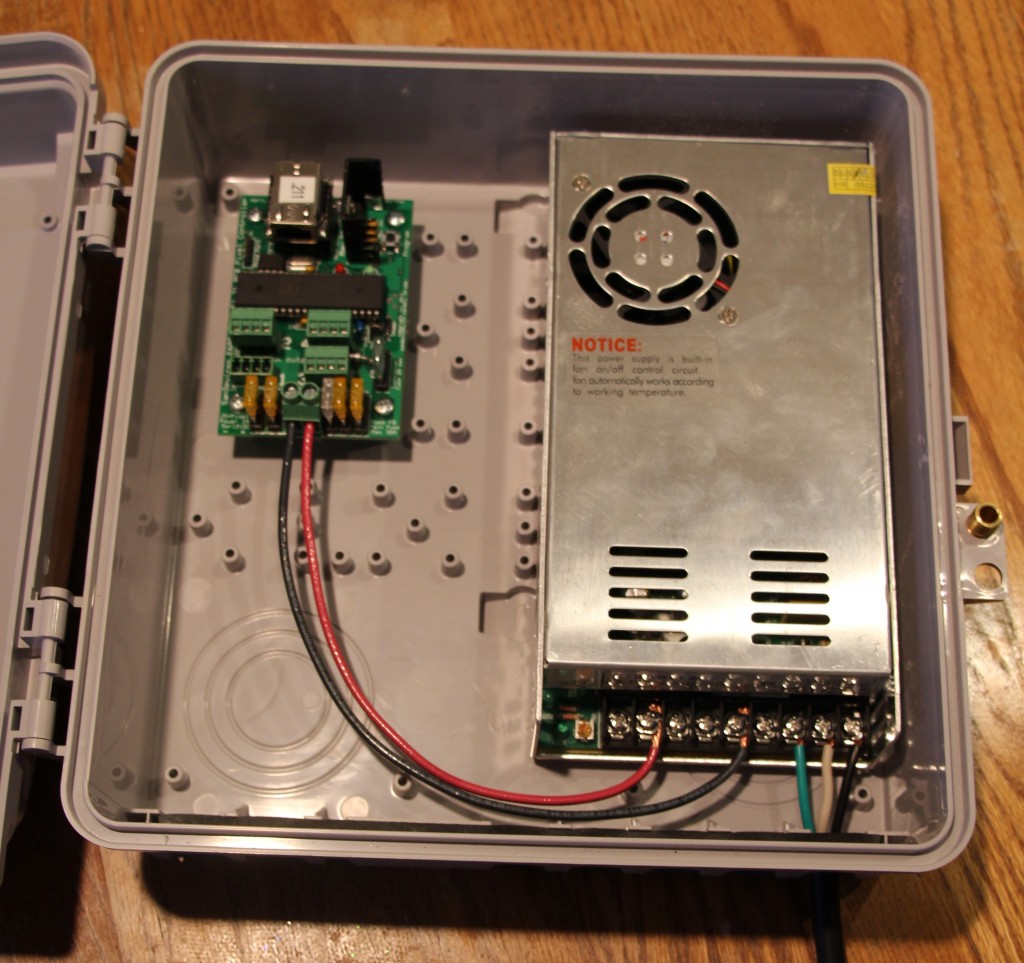 Now to build the mounts that will hold the arches in the ground. First I cut a 3″ section of 2″ pipe, then cut a 1/2″ section. I split both of those down the middle. 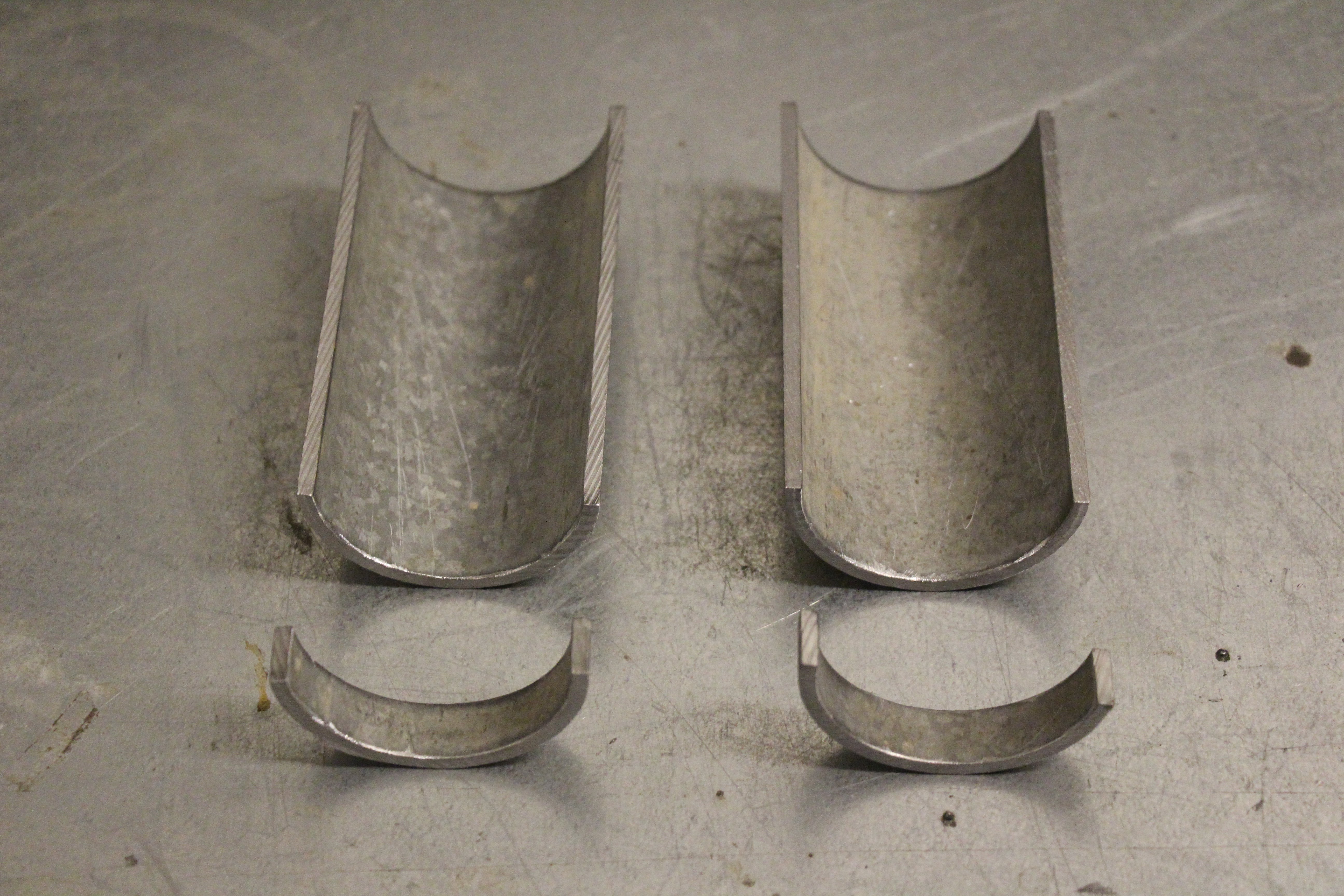 Then I welded the 1/2″ inch pieces inside the 3″ pieces. The 1/2 piece will form a lip that the HDPE will rest on. 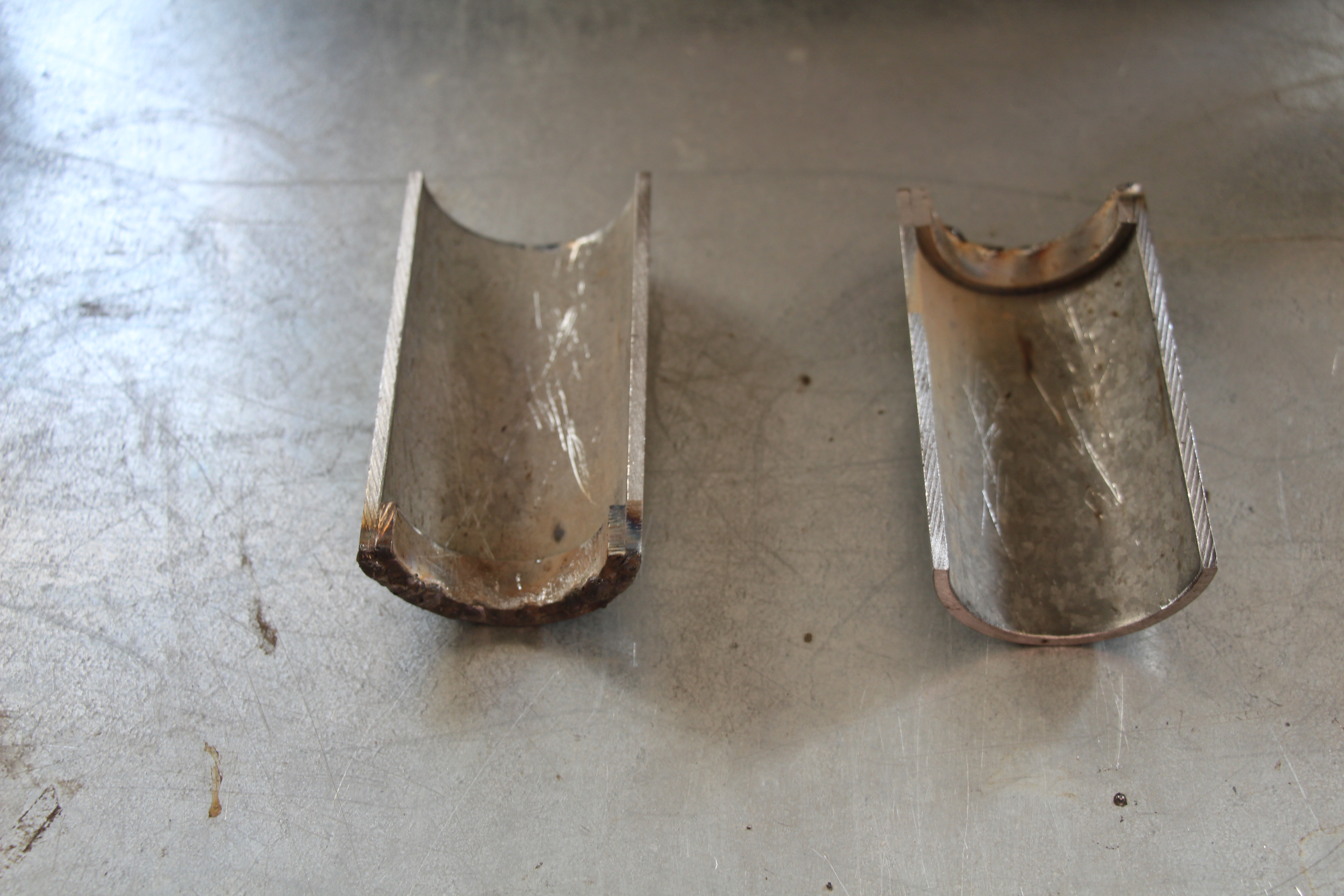 Next I drilled 5/16″ holes in the centers of the pipe sections and countersunk them. 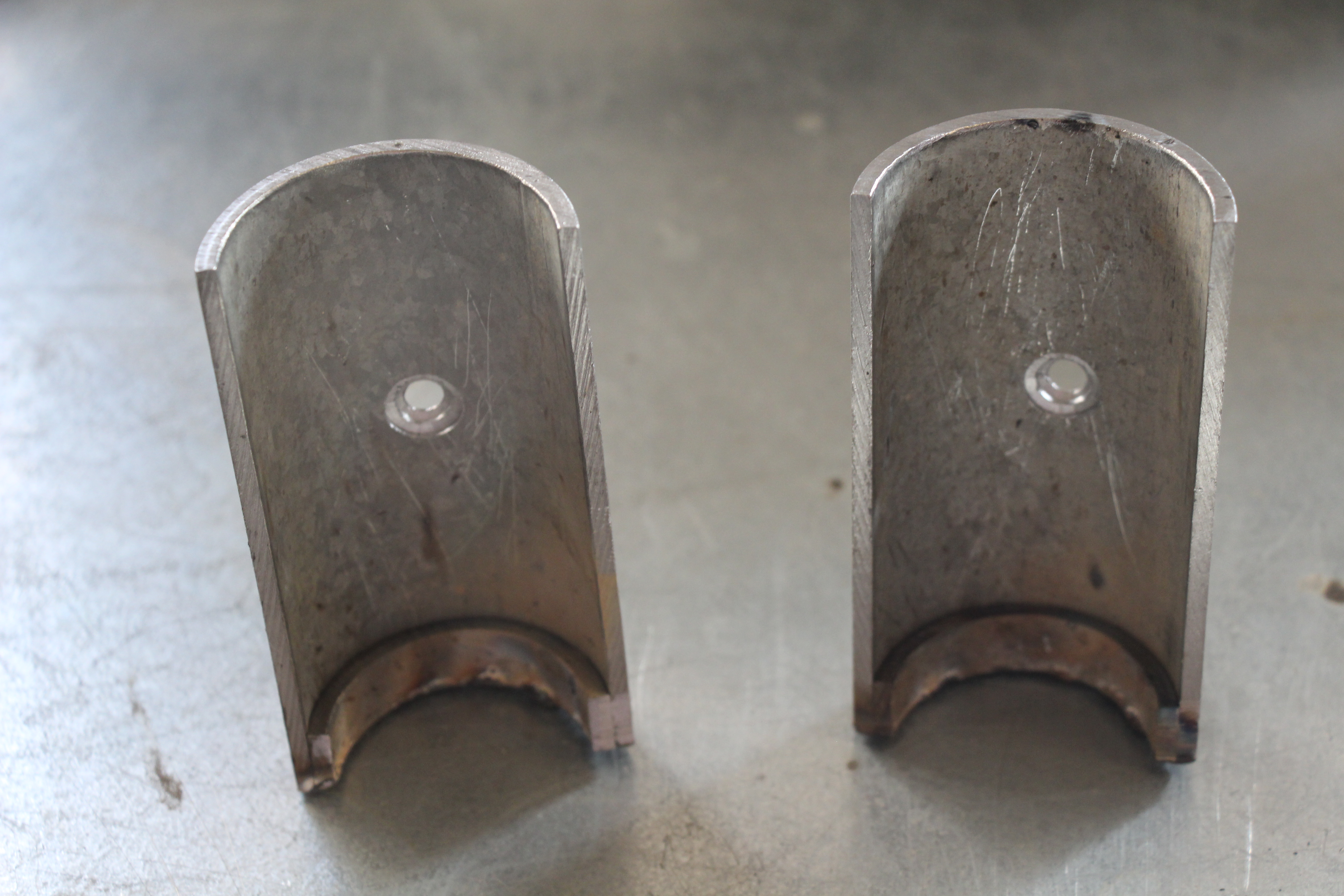 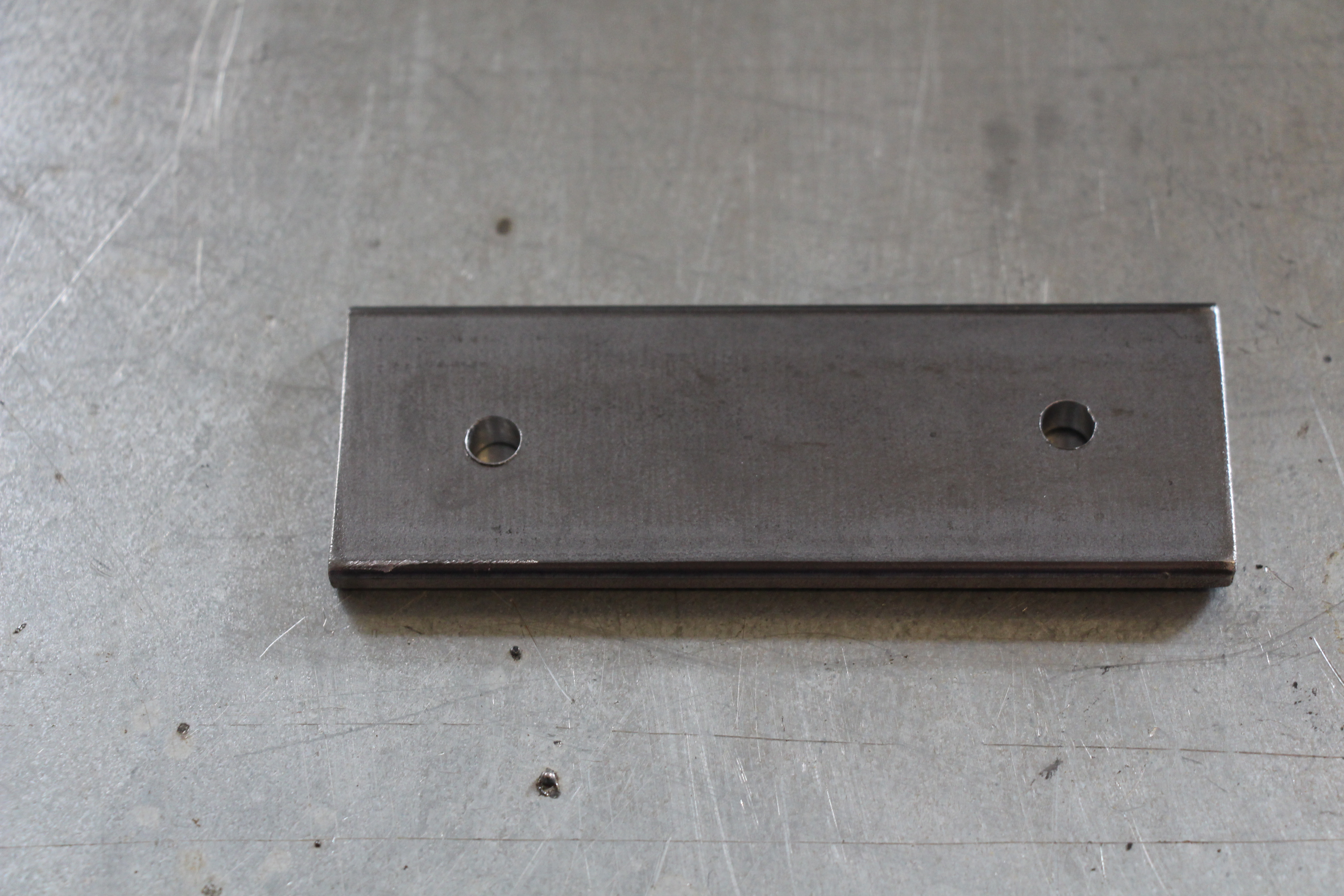 Then I bolted the 2 pieces of pipe to the flat stock. I used 5/16″ flat head bolts. By countersinking the holes, the bolt heads didn’t stick out, which will allow the HDPE tubing to fit snugly against the pipe. Having them spaced this way allows the pipe sections to turn out at the top just a bit to fit the arch tubing. (pic)

I got some 2′ green fence posts from Home Depot and cut them in half. This is the part that will go in the ground. (pic)

Then I bolted the flat stock to the pieces of fence post. This completes the mounts. I made 24 of them. (pic)

It is easiest to install the pixel strips in the tubing before installing tubing in the mounts. However, this works best if you have 4 people to help. I have two of my daughters each hold an arch up in the air. Then my wife and I thread the pixel strip through both arches. Then we carefully walk them over to the mounts, slide them in and zip tie them in place. (pic)

Here is what the mount looks like in the ground with the tubing connected.

I covered the ends with mulch to help keep snow from blowing up into the arches in case we got a snowstorm with a lot of wind. 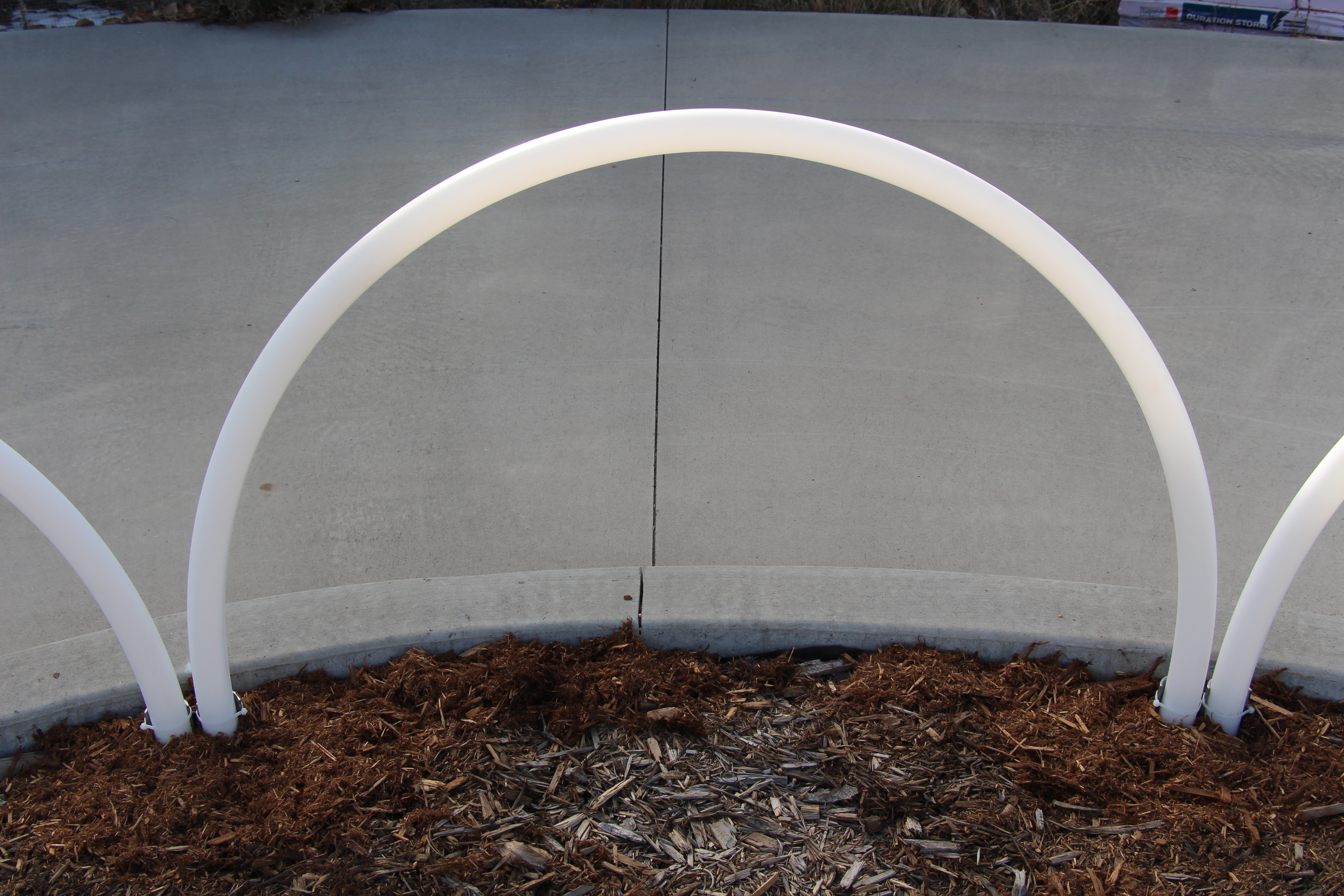