I tried in late November 2014 to move over to xLights, but I found that my LOR controllers could not keep up and I started getting serious lag in their effects. Those controllers are running the LOR protocol. I am going to switch them over to use raw DMX instead, this will hopefully get rid of the lag issue running them in xLights.

In order to do that, I need change the channel definitions of all my LOR controllers over to DMX Universe 1. I didn’t know about this requirement when I first started out with RGB lights, so I have already used Universe 1 for two of my arches in the circle drive. So the first step in this process is to free up Universe 1. Right now I use Universes 1-12 for the arches, and Universes 13-22 for the eaves and roofline. I want to keep these grouped similarly, am I a little OCD? So I download and install Notepad++. Then I make a copy of my LOR .lcc file, which is just an XML file. I load that up in Notepad++, and do a bunch of global search and replaces to increment all my Universe numbers by 1. So 22->23, 21->22, 20->21, … , 3->4, 2->3, & 1->2. So now I have my arches on Universes 2-13, and my eaves and roofline on Universes 14-23.

Then I simply imported the updated .lcc file back into all of my sequences and saved them as new versions. So far, so good.

Here is my LOR configuration, I did not change anything here 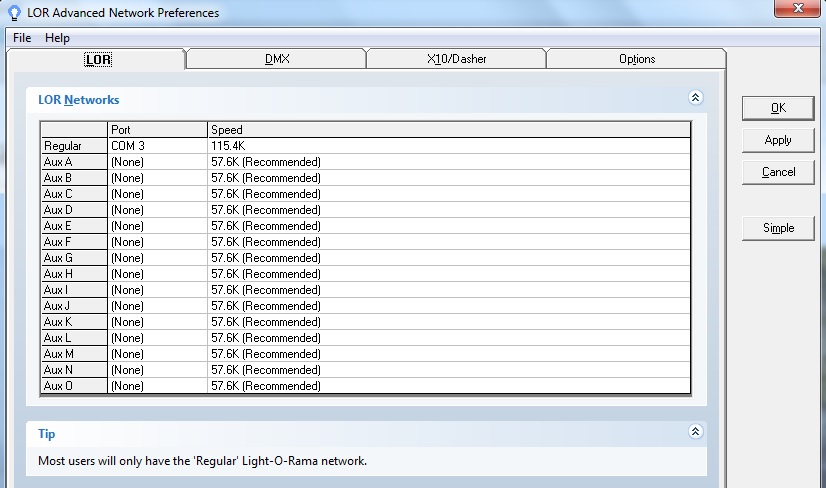 Next I updated my LOR Network DMX Configuration, matching the Universes to the appropriate controllers. 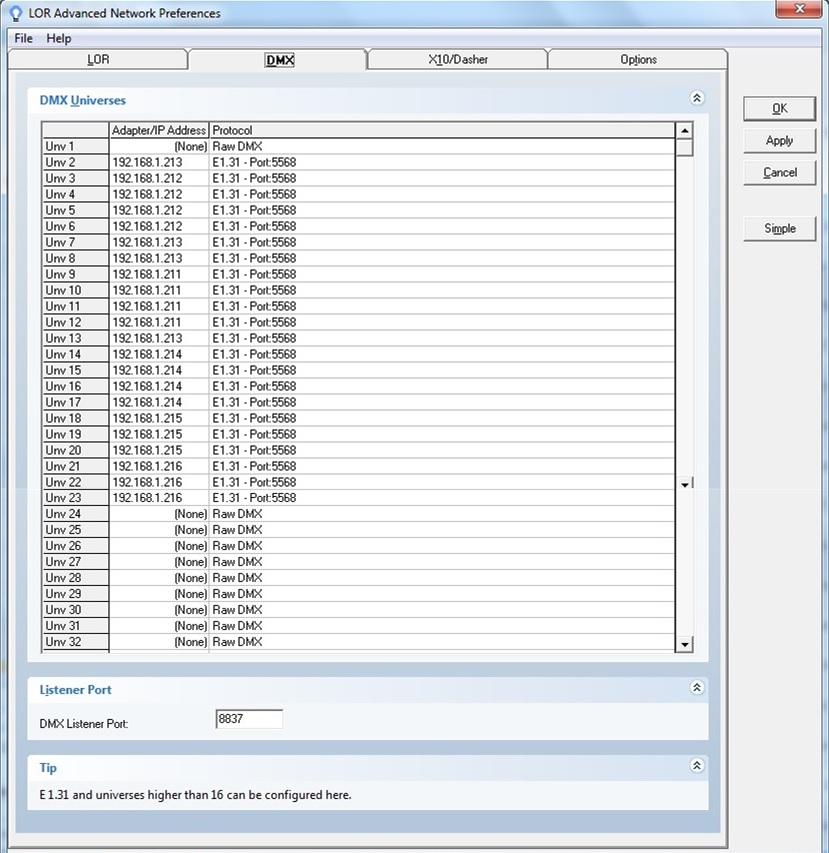 Next I went into all six of my E6804 controllers and incremented the Universe numbers on those to match. Here are screenshots of the configuration of them. 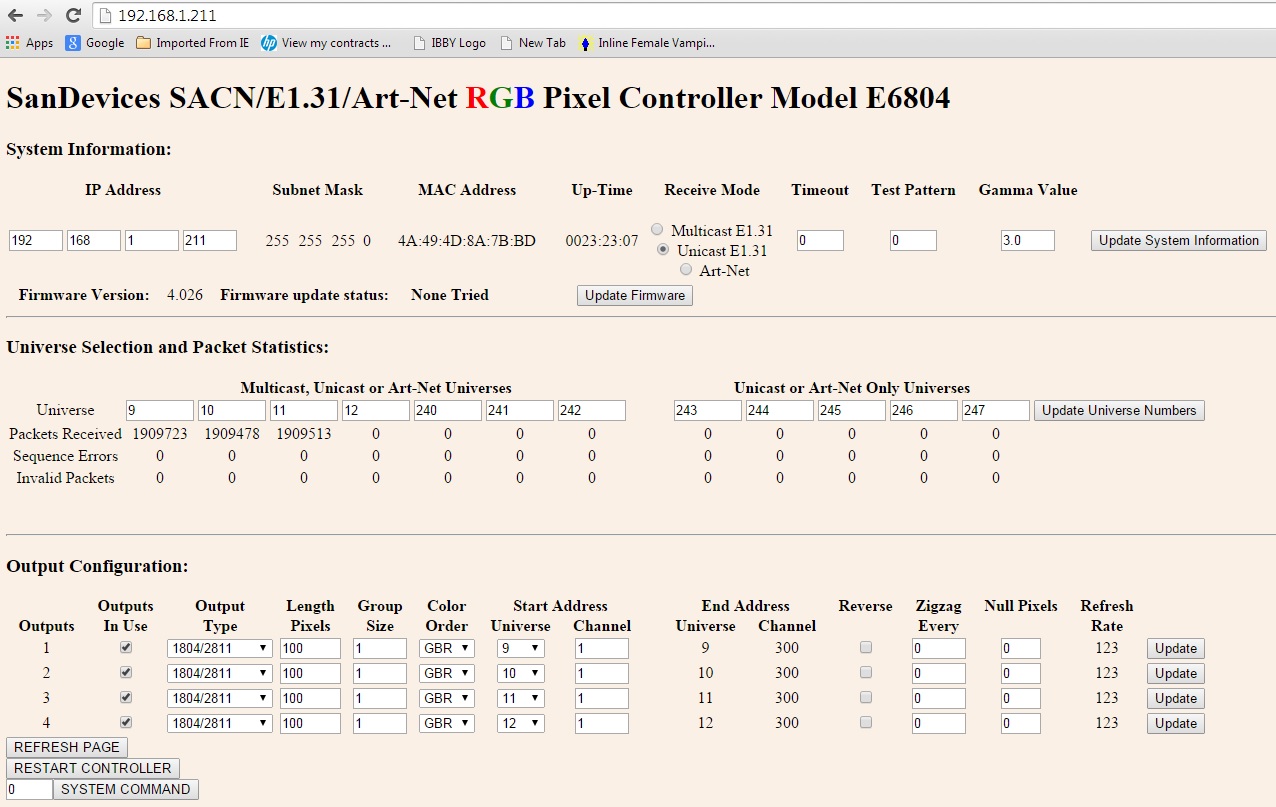 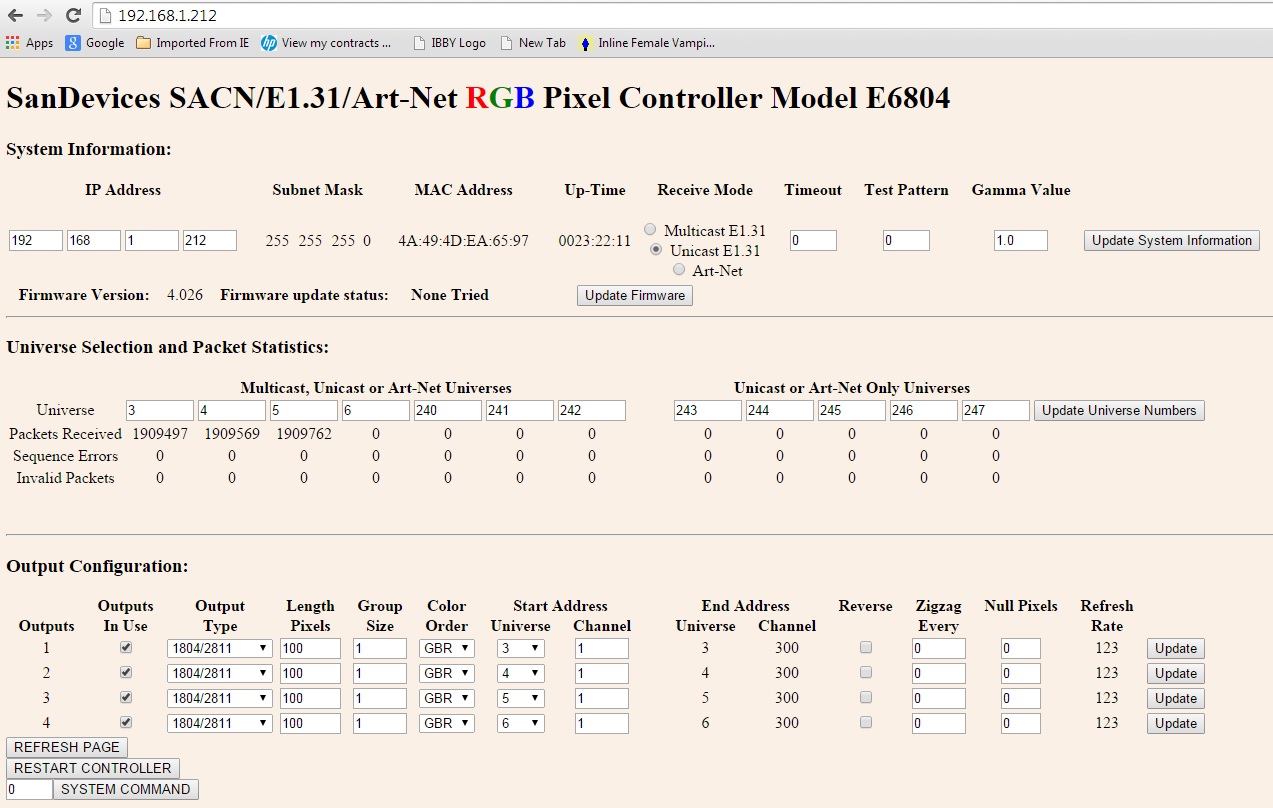 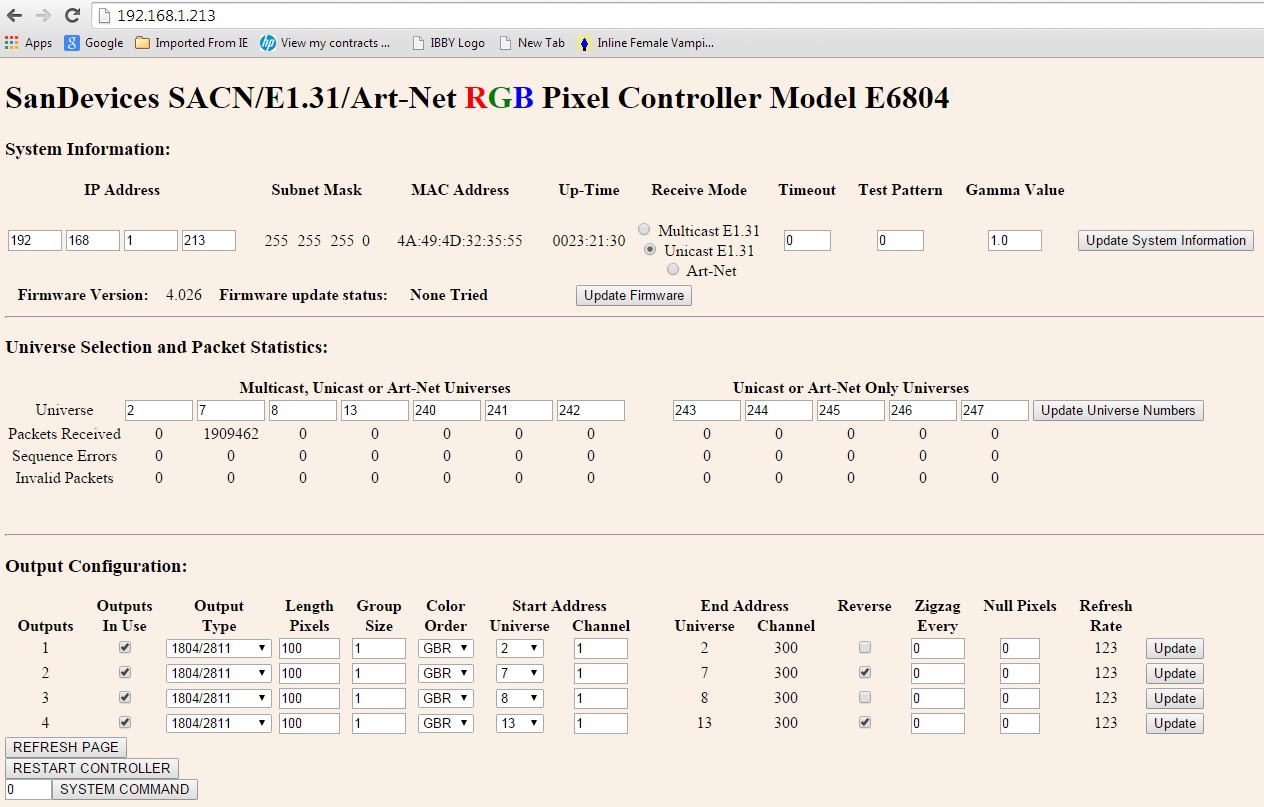 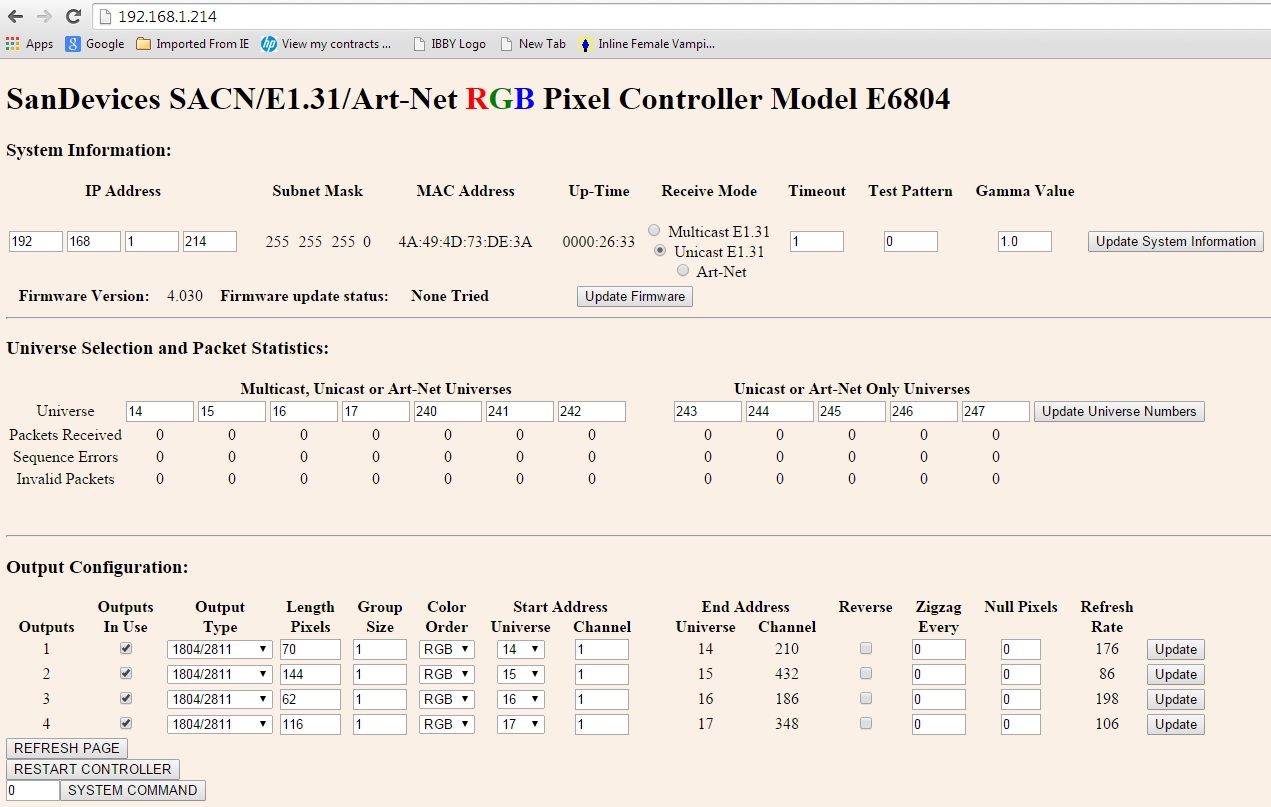 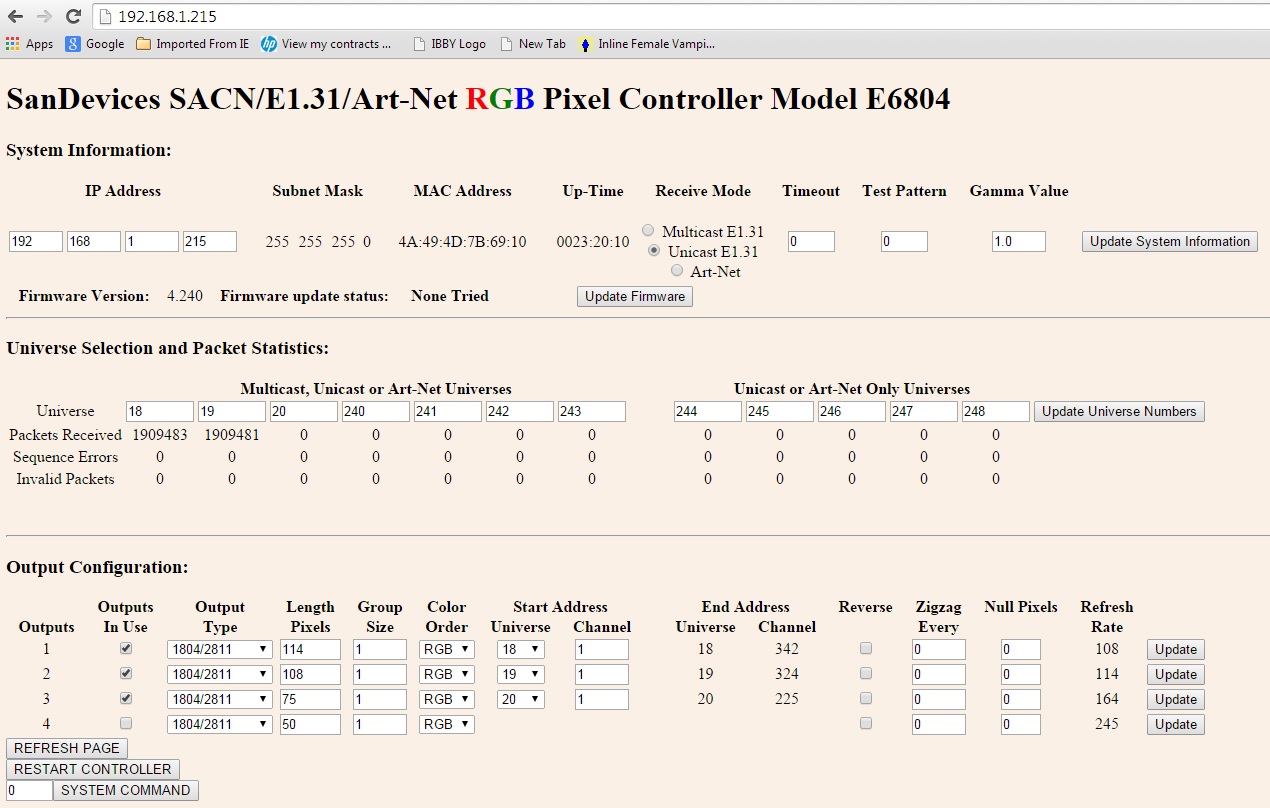 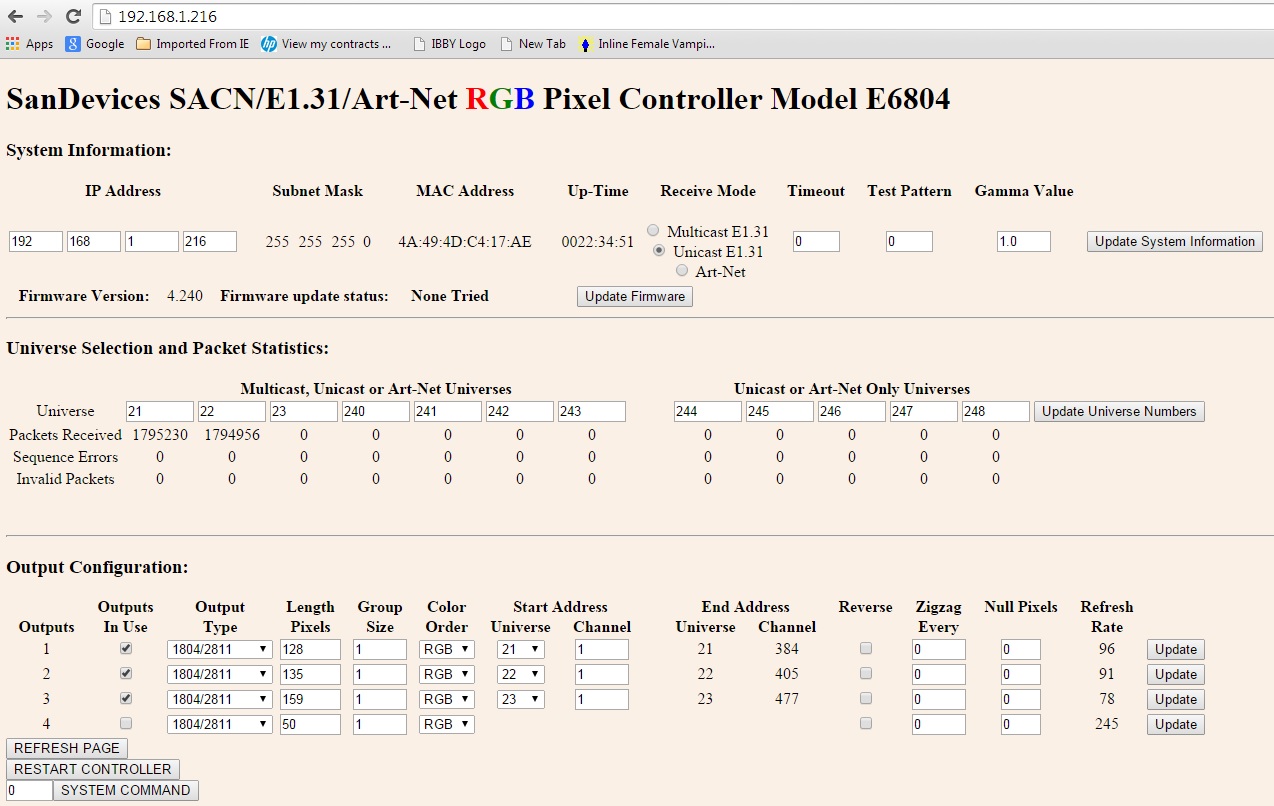 I ran each sequence with this new configuration, and everything looks exactly as it did before, just as it should.

January 15, 2015
The next step in this process is to change over from LOR to DMX within the LOR software. First I went into the LOR Network Configuration, to the LOR tab, and changed the Regular Network Port to (None). 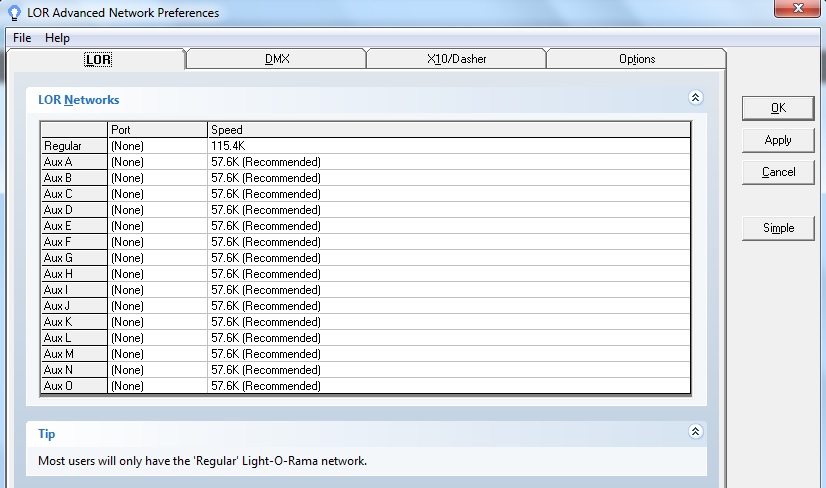 Then I went to the DMX tab and set the Adapter for Universe 1 to be my USB adapter.

Now for the tedious part. I need to change the info on each LOR controller channel. Here is the mapping of LOR Unit/Channel numbers to their DMX channel counterparts.
LOR DMX Doc

I opened up a sequence in the LOR Sequence Editor, went into each LOR controller channel and changed the configuration to DMX Universe 1. I did this for all 208 channels, it took a couple of hours.

Now to see if this set of changes worked. I ran the sequence directly from the LOR Sequence Editor and it worked! I do notice that effects on the megatree does look just slightly different. It must just be the difference in how the LOR controllers process DMX commands as opposed to native LOR commands. I don’t think that anybody other than me will ever notice it.

Now to update my xLights configuration. I went into the setup tab, setup the first line to be the OpenDMX Network Type, incremented all my universes numbers by 1. The first line doesn’t say it explicitly, but I believe it will be Universe 1. This matches the setup in LOR. 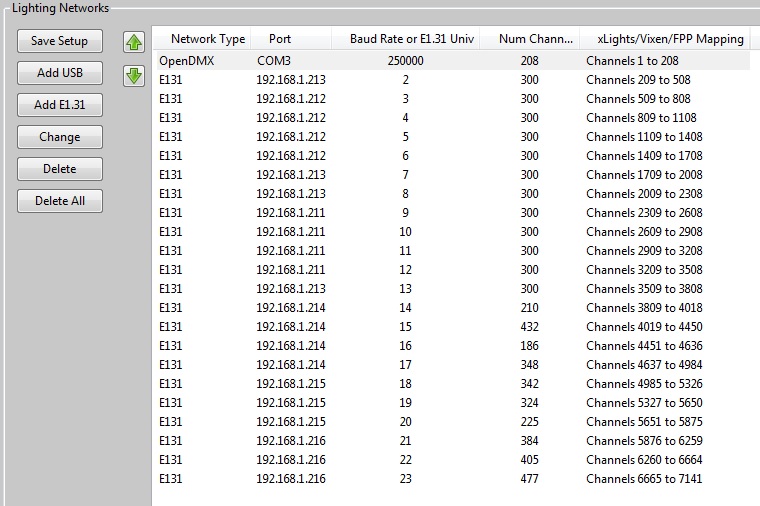