January 4, 2015
In 2014, we drove around town to see other peoples lights. One of the cool things I saw was a Bethlehem star with light strings going down to a nativity scene. This is a picture of it, although it is a little hard to see the lights from the star down to the nativity with the house lights in the background. 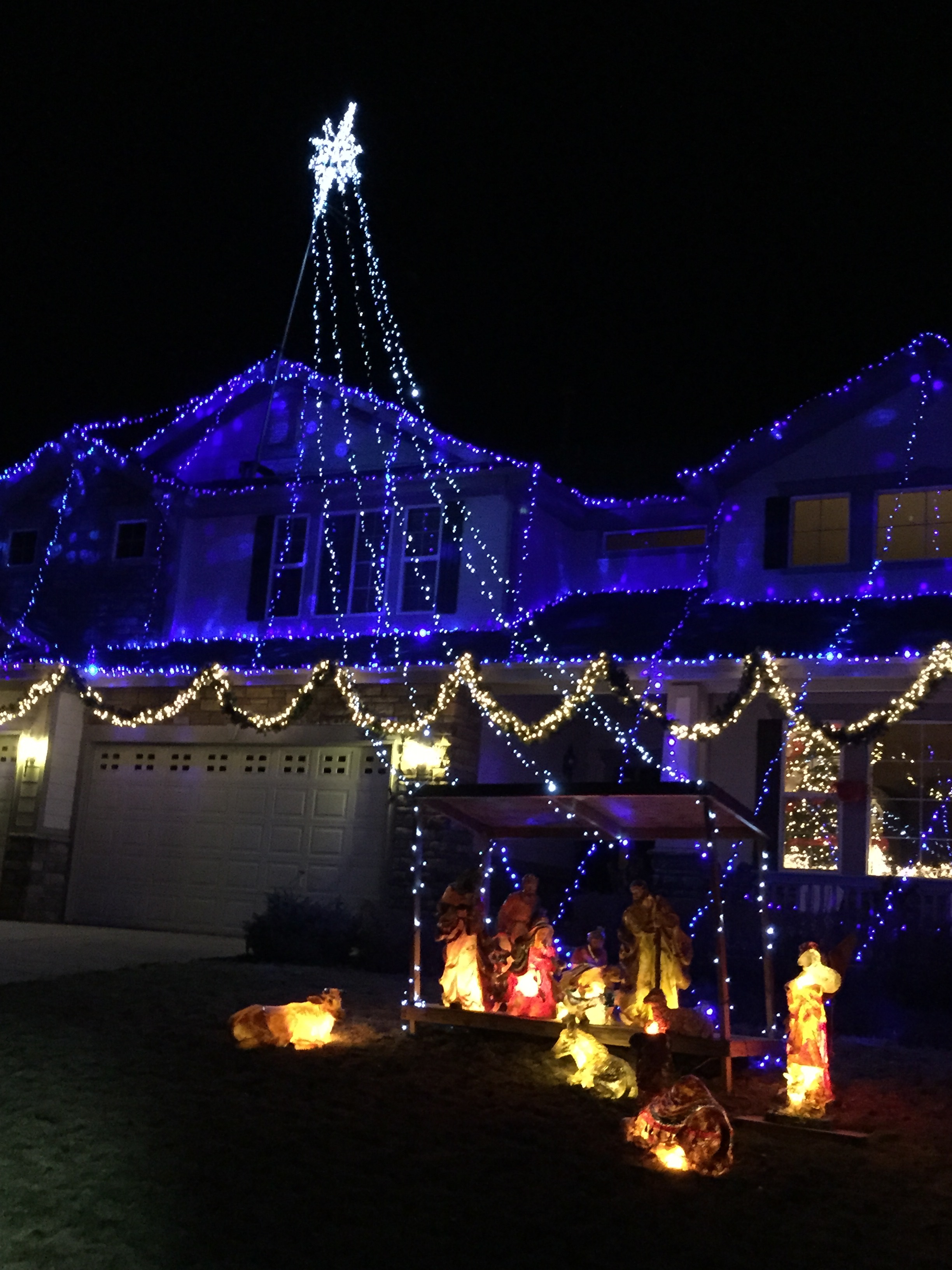 I plan to do something similar to that on the north side of the driveway for the 2015 season. I’m thinking a 2-sided Bethlehem (Holdman) Star with large pixels, then use strings of maybe bullet-style pixels coming down to the corners of the nativity stable, and maybe spotlights on the individual nativity characters.

I’ve been doing research on decent-sized outdoor nativity scenes, and there are not a lot of choices that I have found. The best thing I have found so far is an outdoor set made by General Foam Plastics. The best prices I have found on them are from a place called Bronner’s, which is a huge Christmas store in Michigan. Here is a link to all the various pieces that make up the set. Bronner’s Nativity Pieces

I have found a few of the individual pieces on craigslist, but have not been able to get any of them so far.

I also need to build some sort of a stable for at least some of the pieces to live in. We have a small nativity set that we put in the house, I might try to do a structure similar to that for the outdoor scene. 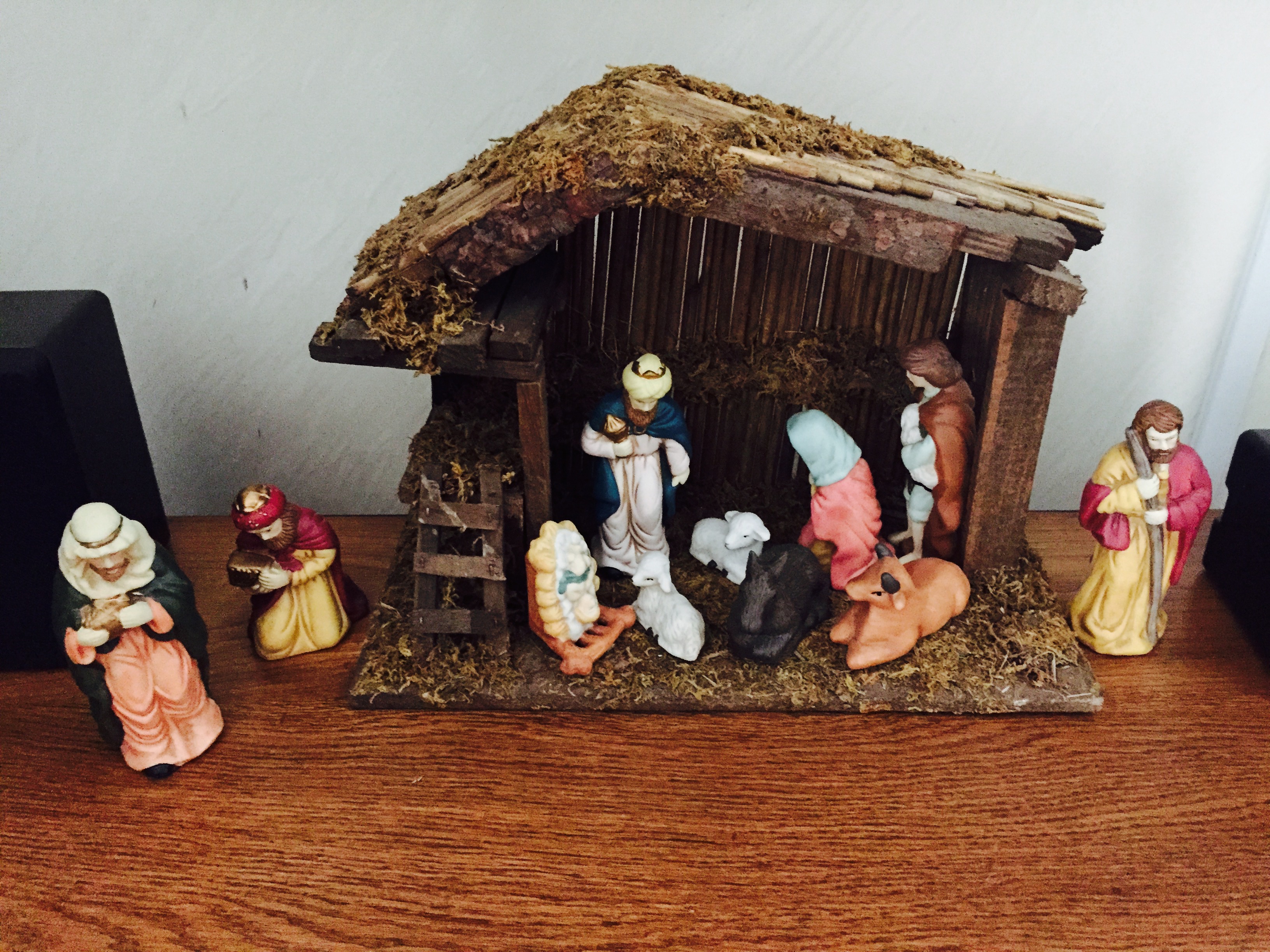 January 6, 2016
I have been working with Boscoyostudio.com to create a star out of ABS plastic that I can mount 12mm pixels in, similar to their monster matrix panels. This is the first iteration of that design.

March 25, 2016
My discussions with Boscoyostudio.com didn’t go anywhere, so I’m changing direction a bit. I have several 4′ x 8′ sheets of coro that I purchased from Home Depot a couple of years ago, so I am going to pursue making the star out of that and using PixaBulbs for the lights. This is the approximate layout of what I want. 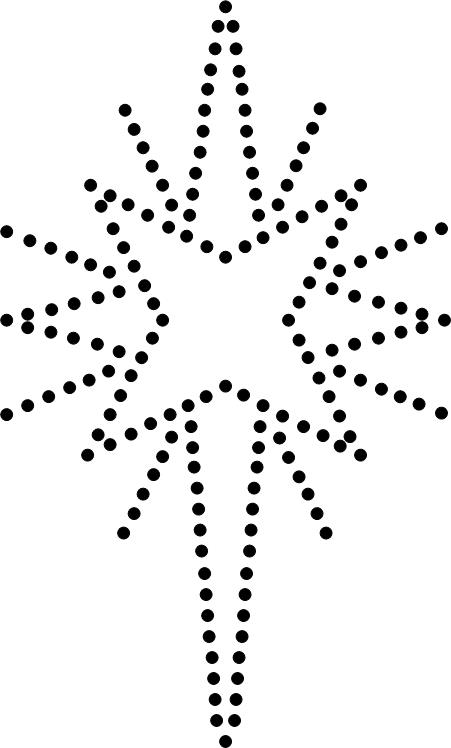 The first task was to get the image transferred onto the coro. I have an old projector that still works, so I set it up in the shop to project onto the sheet of coro sitting against a wall. I sized the image to get it as big as I could and still get it to fit on the sheet and leave a small border for the wooden frame. (pic)

Now to get all the holes made. My first attempt was with a 7/8″ forstner bit for my drill. That worked ok, but it was hard to keep it exactly where I wanted the hole, and sometimes it tore the coro and didn’t cut through cleanly. So I ordered this 7/8″ Hole Punch on Amazon. Using that punch and a plastic cutting board from Walmart, I was able to punch all the holes out very cleanly.

April 2, 2016
With all the holes punched, I mounted the lights in it to see how it looked. It looked great, here is a very short video of a sequence of the shockwave effect on it. Video Clip

As happy as I was with this version of the star, I was worried about how much it would catch the wind. After last year’s debacle with the megatree and the Boscoyo Pixabulb strips, I knew it didn’t take much surface area for the wind to wreak havoc on it. So I embarked on building a new prototype out of steel.

April 9, 2016
I finished the steel frame prototype. I used the coro prototype to transfer the layout onto a piece of plywood, then used pieces of 3/4″ x 3/16″ steel strap to build the frame. It took a full day of cutting, grinding and welding to get it done, but I was pretty happy with how it turned out. (pic)

The next step was to mount lights on it and see how it looked. I wrapped the lights around the frame so that the extra wire was on the back side. I used velcro strips to hol the lights on, which was a good idea because it took a lot of adjusting to get it right. This took almost another full day. Here is what it looks like with the lights mounted. 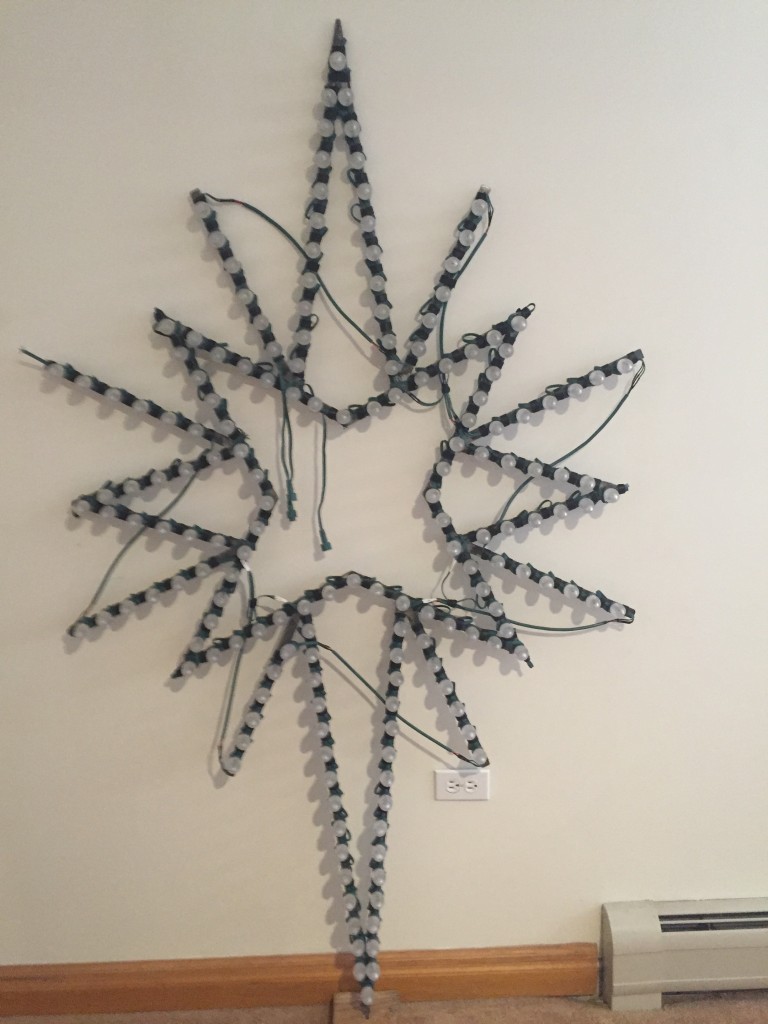 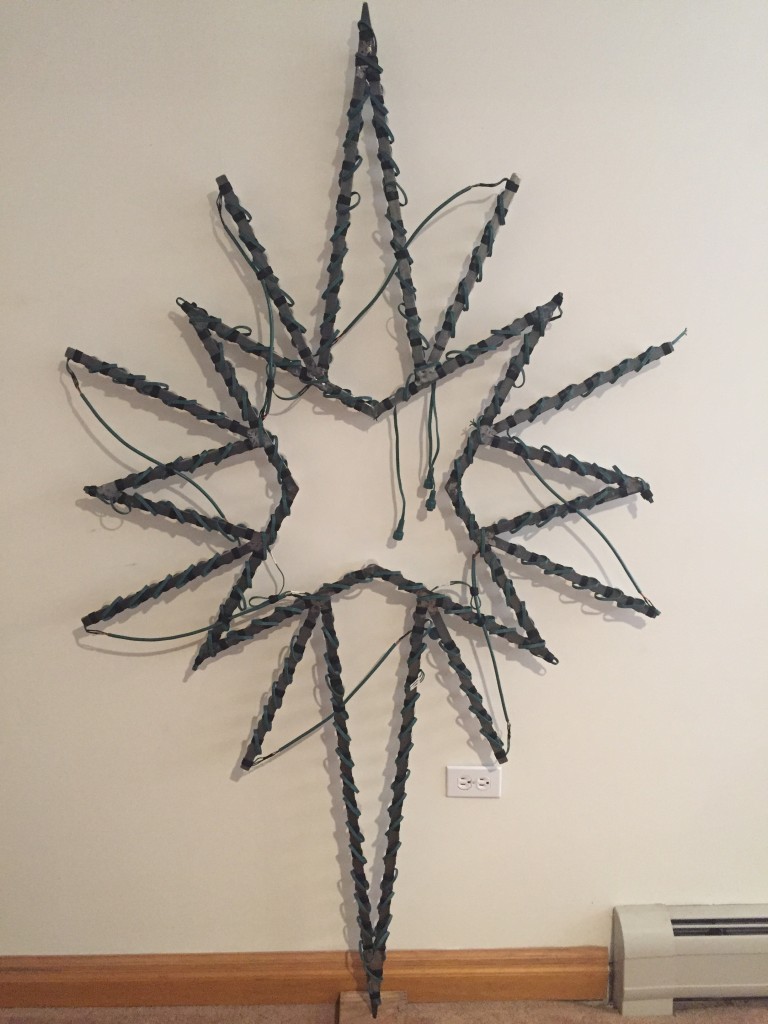 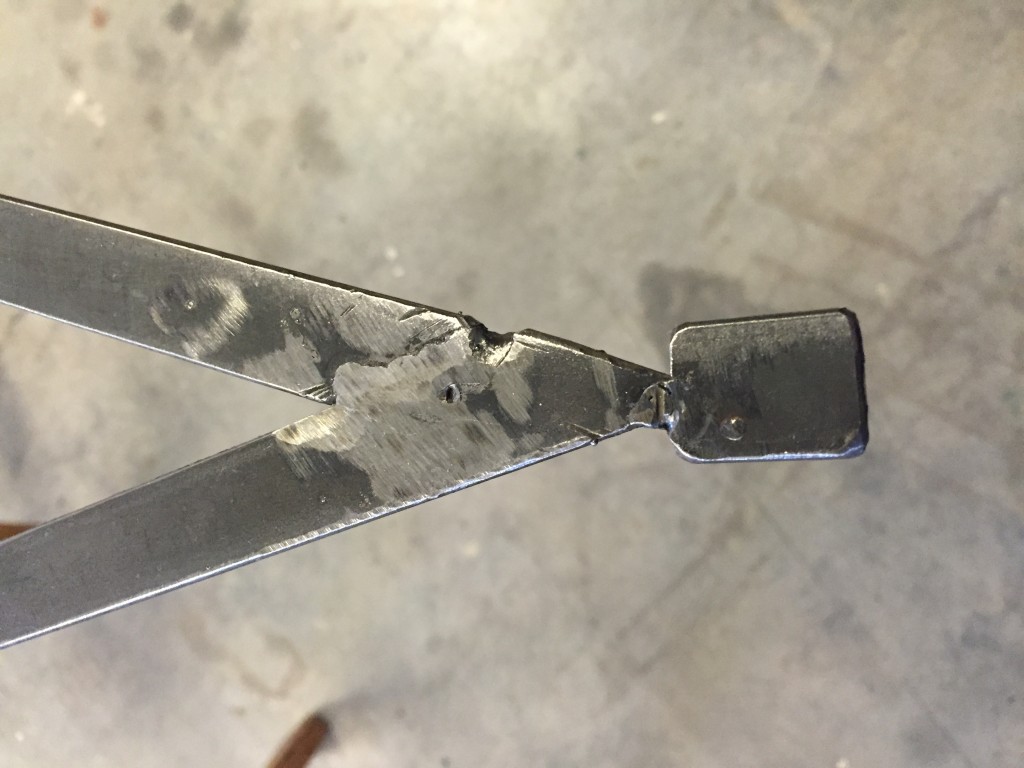 I also didn’t have quite enough room on the insides of the points to velcro the strips down well, so I needed to grind those out a little. 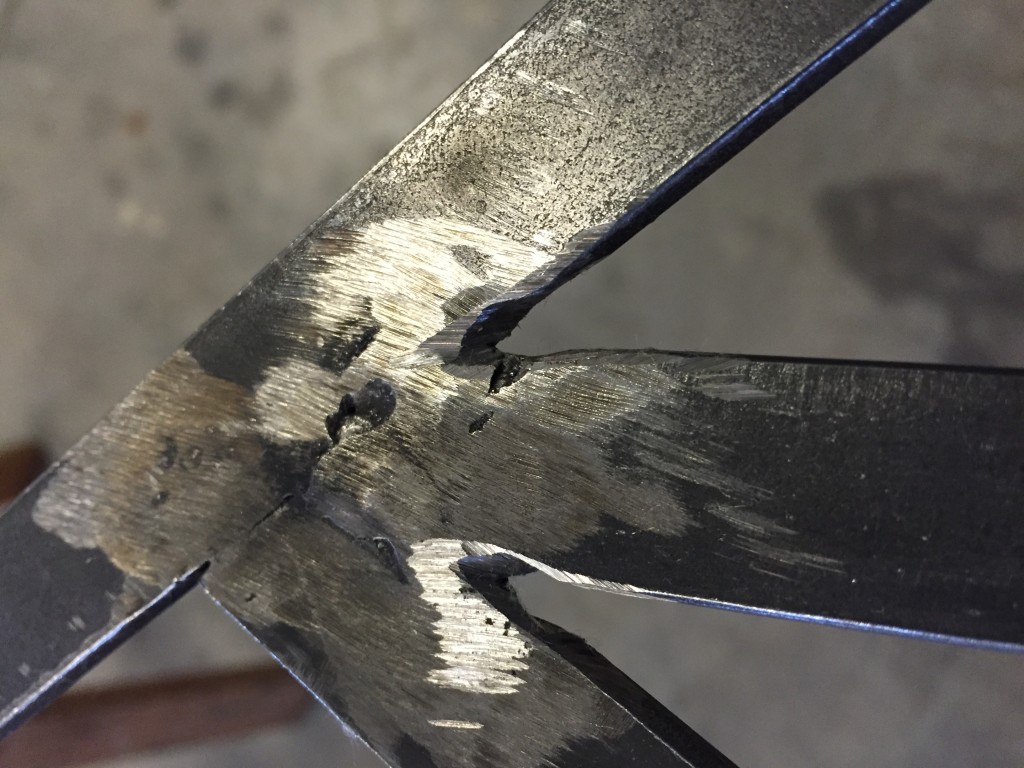 Once I got the nubs on the end of the points welded on, I decided to work on the mounts to attach the star to the support pole. First I welded some cross braces on the inside of the inner star, and drilled 2 holes in the vertical one. These will be the main support points for the stars. 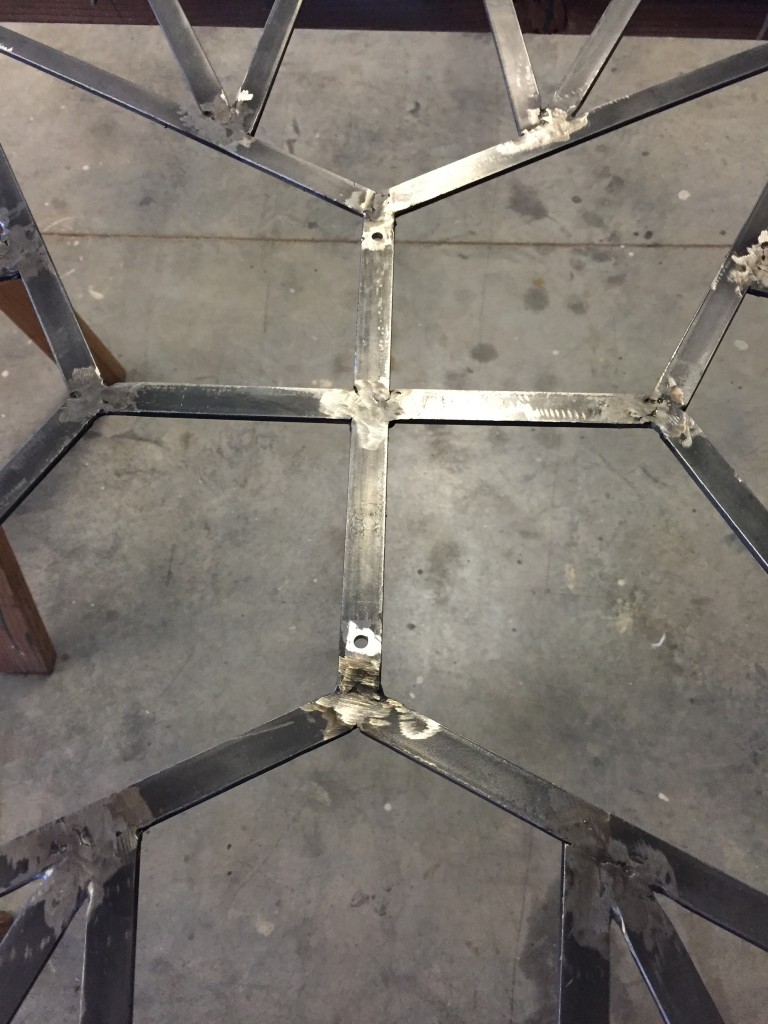 I also drilled holes in the nubs of the upper and lower points of the star. These will be the other 2 support points.

The support pole will be 36′ high, it will be three 12′ sections that will sleeve together. I marked and drilled the 4 mounting holes in the top section of the support pole.
The stars need to be spaced out a little bit from the support pole to allow room for the light wires on the back sides, so I got some 1/4″ pipe and cut 1″ pieces to use as spacers. (pic)

I mounted the stars on the support pole to see how everything fit. The sides were a little wobbly, so I cut 2 more spacers, drilled holes in the 2 nubs on the side points, and bolted them together. This tightened everything up considerably. Here are both stars mounted to the top section of the support pole. 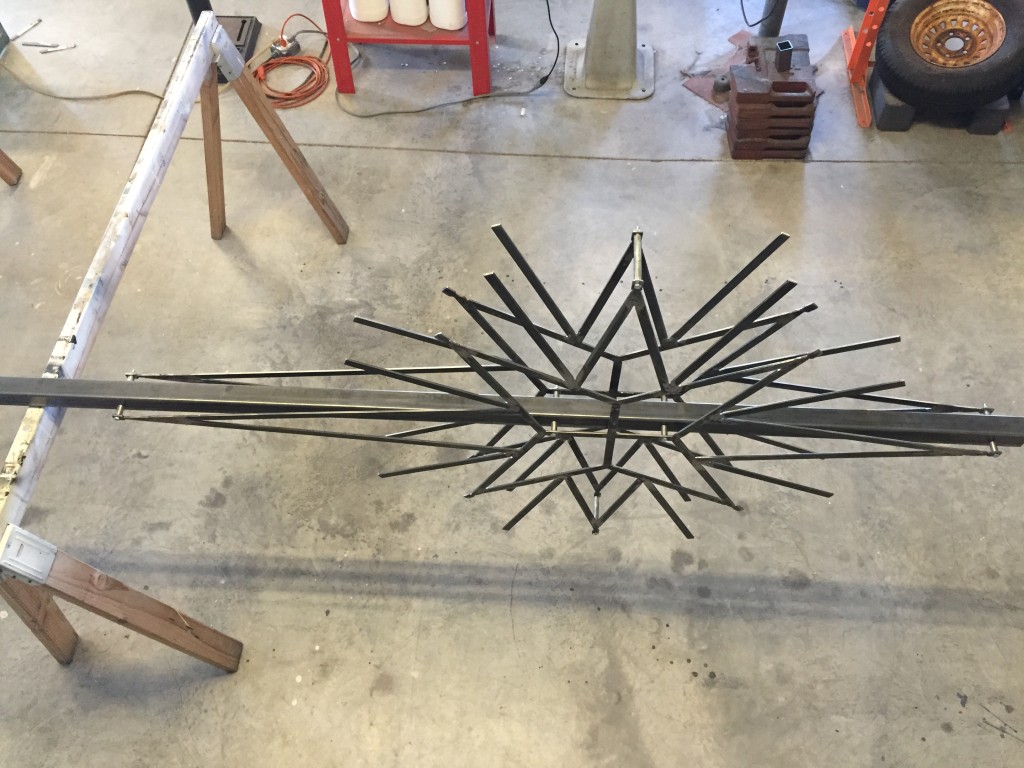 Next the stars and the spacers got 3 coats of flat black paint. I looked at getting everything powder coated, but the cost was more than I wanted to spend.

I needed a place to attach guy-wires at the top of the top section of the support pole. For these, I got two 5/16″ eyebolts and mounted them at the very top of the pole. 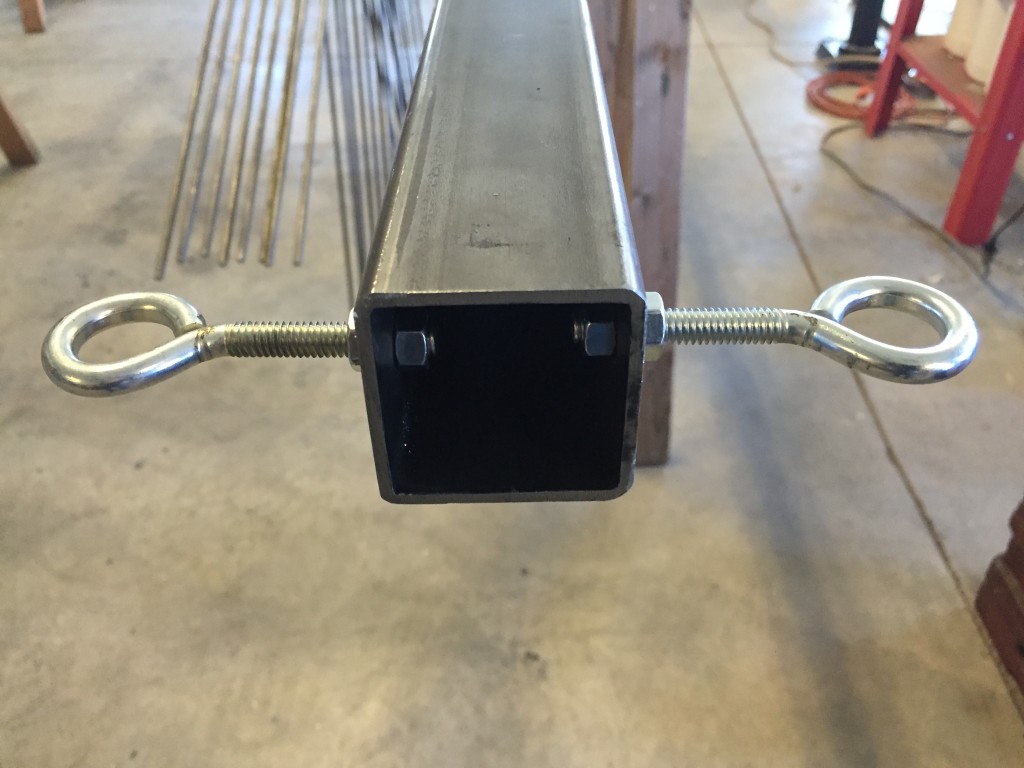 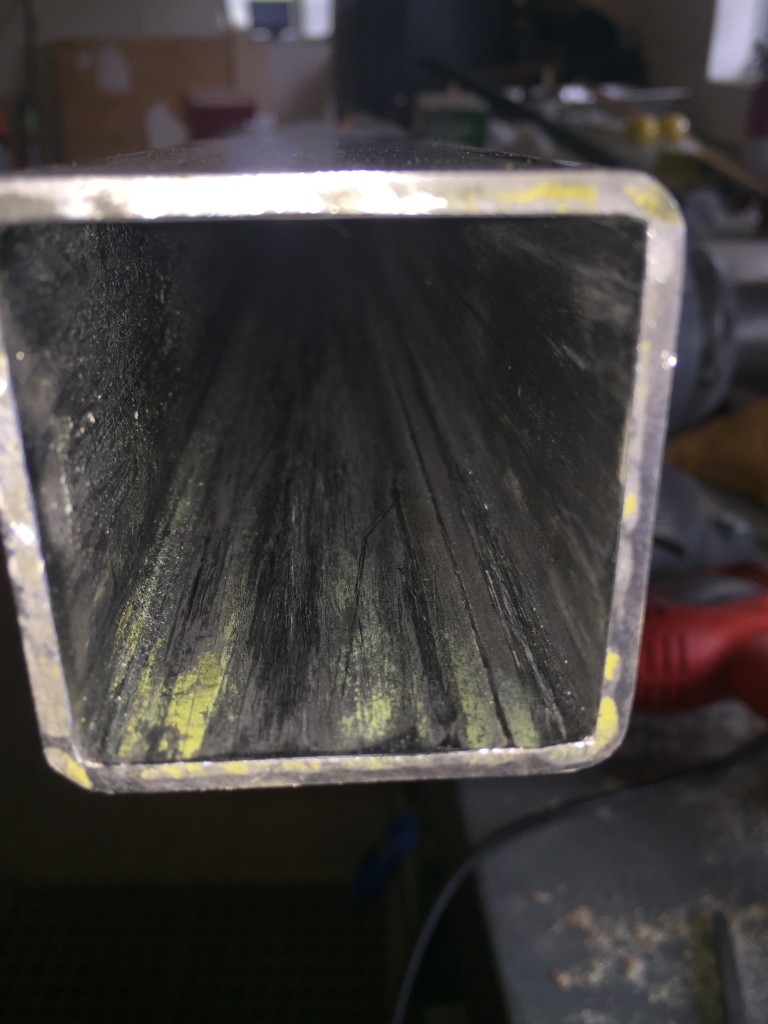 I drilled 4 holes at the top of the lower 2 sections of the support pole, about 4″ from the end. 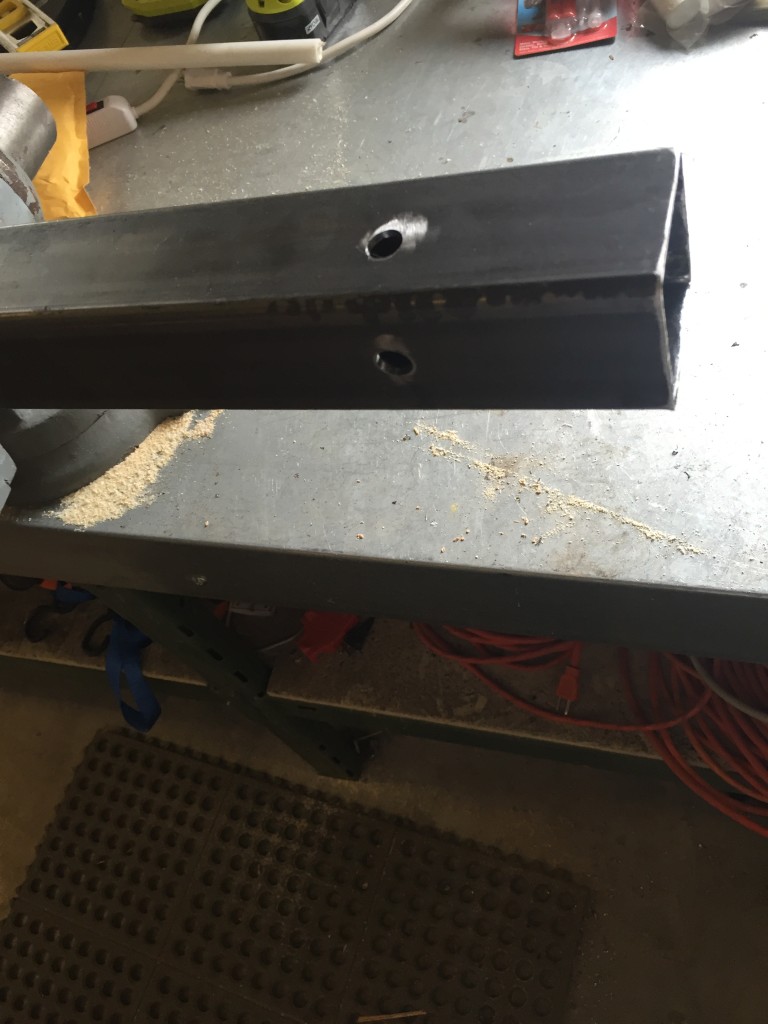 Then I slid the 1 3/4″ tubing into them 9″ and welded them together through the holes in the outer tubing. 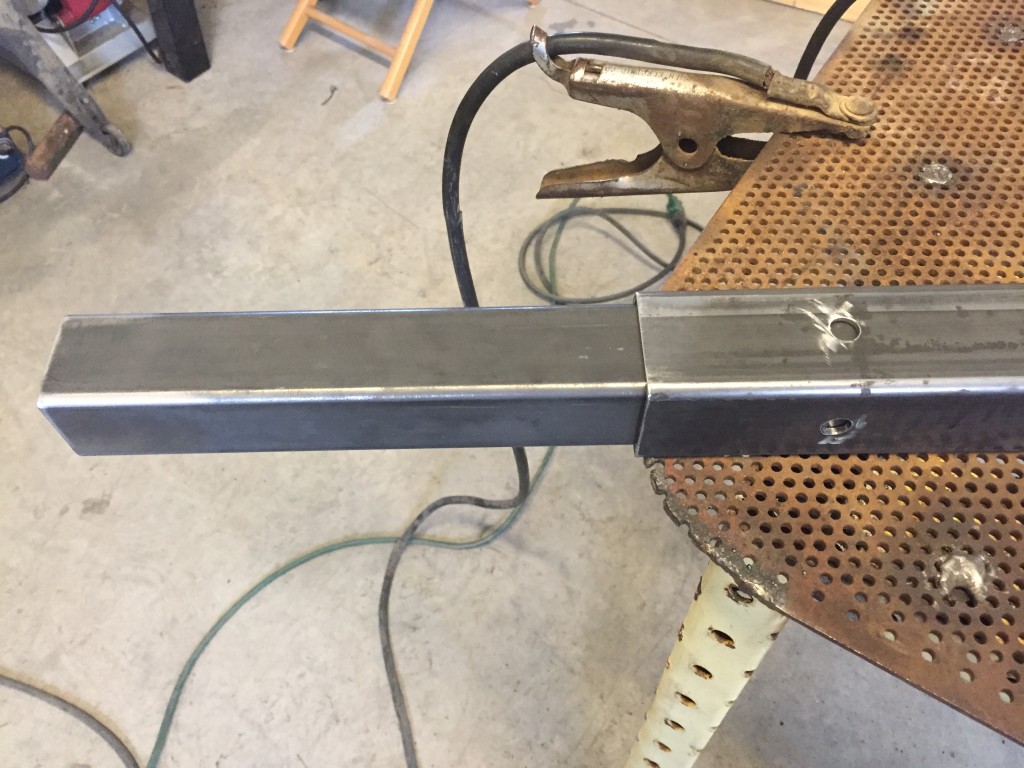 Once I welded and ground down the welds holding the sleeves, it was time to wire brush and paint all three sections flat black. 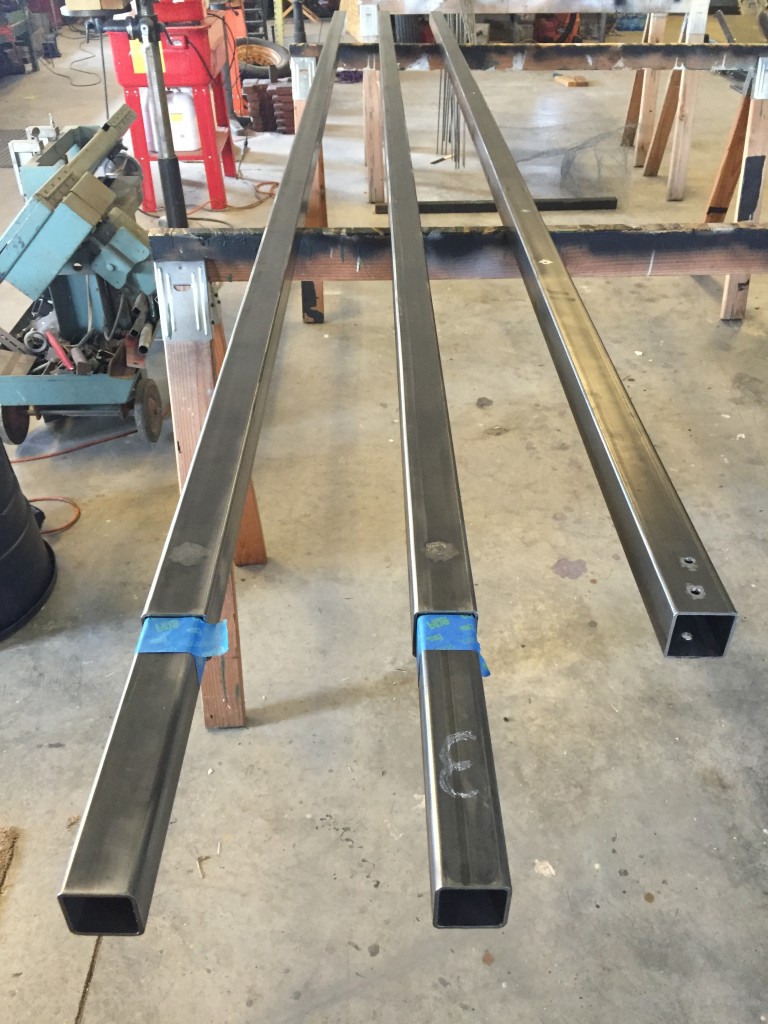 Once I had the pole sections painted, I painted small numbers on them to mark which sections went together (pic)